I love the sport of Miniature Golf. Well, is it even a sport? Golf is, so Mini Golf is, there. The brightly-colored balls, the sound of the artificial water streams, oldies playing quietly on speakers mounted proudly on tall wooden posts... Each course is filled to the brim with its own personality. I've gone to many places to play and I find the smaller ones to be the best. If a place typically has more than one thing in it besides mini golf (like batting cages or go-karts), I find it to have less character and appeal. Not to say they aren't fun. I just find the fancier places like those to be a bit too fancy for their own good. I like the middling to small places. There's this ice cream place near us called The Chubby Seagull that also has a small mini golf course. It was pretty run down, but a few years ago they renovated the building, and last year I believe they started renovating the golf course. I haven't played on it since it was new, but I had fun on that crappy old run-down place. It still isn't fancy or anything, just a bit tidied up. For three bucks it was pretty fun. I haven't seen the new course since construction; I wonder if they have made any progress on it during COVID-19. Other places I have enjoyed were The Red Putter in Door County (which was also quite reasonable, especially for Door County) and there was another place near Blue Harbor in Sheboygan (name escapes me at the moment).

So for my inaugural blog, I have decided to review one of my favorite Atari 2600 games, Miniature Golf.

The game released on the Atari Video Computer System (later renamed the 2600 to differentiate it from the Atari 5200 SuperSystem) in 1978 and was programmed by Tom Reuterdahl. It was supposedly based off of an unreleased Atari arcade game, "Mini-Golf". From what I can tell, you control the power and direction of the ball itself rather than controlling a sentient square and pressing the button to bash into the square and send it flying off at whatever angle you hit it at. I couldn't find much out about the arcade game, nor did I play it for this review. What I could tell about the game is that there are 18 holes in the game and one credit will let you play nine of them, front or back I assume. The holes themselves have much more detail than the 2600 version, with inclines, declines, bunkers, and other background details not present in the home port. One advantage the home version has over the unreleased arcade cabinet is that it is presented in color. Black and White monitors were prevalent in games of the era, and in many cases had colored overlays that added color and sometimes even added graphical elements not programmed into the games, such as the pipes in Atari's Stunt Cycle. These overlays are reminiscent of the ones used on the Magnavox Odyssey. It is unknown if Mini Golf was planned to include an overlay on the arcade cabinet. Though the game's graphics are monochrome, the game graphics themselves are much more detailed than the home port. 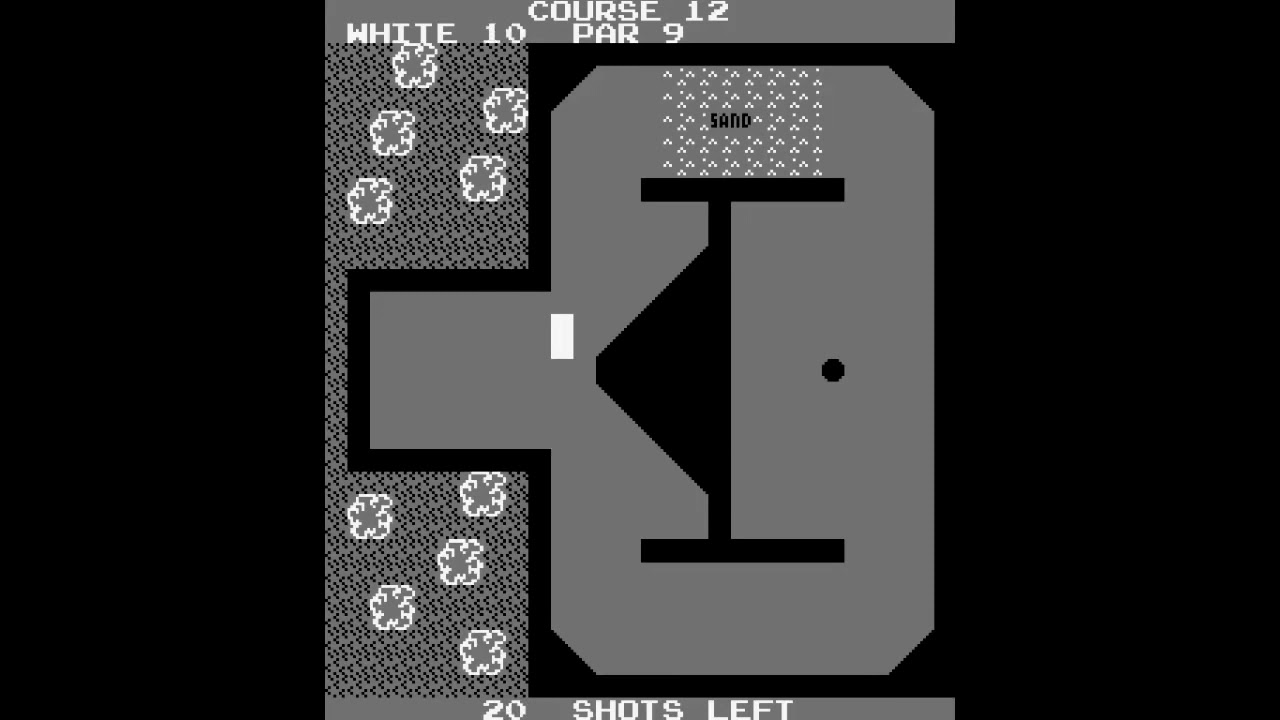 The Atari 2600 home version (which will be our main focus for today) isn't terribly realistic, but that was par for the course (pardon the pun) for early Atari sports games. The physics of the nine holes of Miniature Golf (or Arcade Golf for you Sears shoppers) are much more akin to Billiards and Pool than Putt-Putt. The box art (shown below for Atari and Sears varients) looks nice, but is riddled with problems and inconsistencies. For instance, on the Atari version, you can clearly see that one of the holes is marked 18, though there are only nine in the game. Perhaps a remnant from the cancelled arcade game. The hole layouts do little to match their in-game counterparts; just look at hole nine on the Atari box, though hole eight on the Sears box is arguably comparable to the corresponding hole in the game. Overall, I like the packaging and box art. 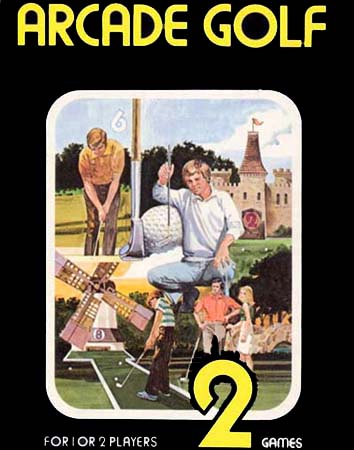 The cartridge only appears to have a single text-label variant for both the Sears and Atari versions. Sadly, this hidden gem appears to have been discontinued sometime around 1981 as it stopped appearing in the Atari catalogs.

Miniature Golf has only two game variations: single player or two players. The difficulty switches affect how far the ball will go when hit; in the A position there is much less friction on the ball, making it go farther but also being much harder to get it to stop exactly where you want it to. The object of the game is the same as typical Golf and Miniature Golf: complete the course in as little strokes (or in this case hits of the small square with the bigger square) as possible. Each of the nine holes in this game is assigned a par. The par, for the unfamiliar, is a target for the hole. You want to stay under it or match it. Since this game does not subtract strokes from your total if you get below par or add them if you go above, it is merely superfluous. All the game does is just track your total number of strokes for the course. At the beginning of each hole, the first player score (blue) will be replaced by the hole number, and the second player score (red) will show the par for the hole. Once the ball is hit for the first time on a hole, the par and hole number will revert back to each player's respective stroke count.

The multiplayer mode is also much different compared to typical golf; instead of the player farthest from the hole having the next turn, each player plays the entire hole before the next player goes in a two-player match. This, in a way, gives the second player an unfair advantage as if the first player does well at a hole, they can try to mimic that to stay on their tails. I haven't found it to be a big deal though and it hasn't seemed to affect any of my multiplayer matches. I am typically the first player, and I typically win the game as well! 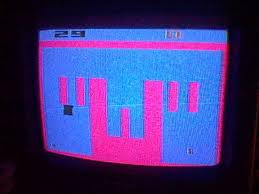 Whoever took this first screenshot I found on Google Image Search is doing horribly! That's only the second hole and he or she already has a whole 20 strokes! Now, whoever took this second picture of their 12-inch Hitachi TV after the ninth hole was a real master! 29 on the whole course--that's a great score! I wonder if anyone can beat it on the scoreboards...

Control-wise the game is a bit strange. At first I was confused; I kept smacking the ball at only a short distance. I soon found out that you really need to pull WAY back before you hit the ball to send it flying off at a reasonable speed. Sometimes there won't be enough room on the screen to move back, so you will need to ricochet the ball around! All of the walls function like giant pinball bumpers as they bounce the ball about, especially when the difficulty switch is in the A position. The big square cursor you control to hit the ball sometimes randomly slows down when you are moving it, and it can't move diagonally, but those are just nitpicks. It's not a very fast-paced game so it doesn't affect gameplay much, though it does make aiming a little bit harder. This game would really benefit from true trakball controls.

You may have noticed another slightly-larger square on each hole. The square is shown as red for the first player and blue for the second. That is supposed to be--get this--a windmill! Get your laughter out now, everyone! Hardy har har, Atari 2600 graphics suck. Though that is why I said hole eight on the Sears Arcade Golf box is fairly accurate.

This "windmill" can either help you our or harm you. For instance, if you get the ball just above the hole in hole eight, the windmill will gladly knock the ball in for you or it will knock it way out of the way. The windmill moves back and forth in eight out of the nine holes, the eighth hole being an exception; it moves down the screen, disappears for a few seconds, and then reappears at the top of the screen.

The hole design is, as expected for a 1978 release, incredibly basic. Like many early 2600 games, all of the background elements (in this case the walls of the hole) are completely symmetrical. This is less apparent in the 2006 fan made sequel, Miniature Golf Plus, where the background elements appear in a higher resolution. You can currently buy a physical cartridge of this hack on Atari Age, which I plan on doing sometime! 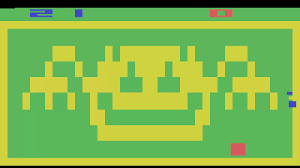 Overall, I feel that Miniature Golf is a must-own game for your VCS. Though it looks like it might be an Adventure or Video Olympics spinoff, this game will not disappoint. The game offers a lot of strategy and is not very easy to master. Unless you are me! The game physics are very nuanced and reliable if you know what you are doing. If you have a friend over and you want to play Atari together, Miniature or Arcade Golf is a great game to pull out and play a few rounds of. Games go quickly and the game is very replayable as you learn new ways to improve your score. As soon as you finish the ninth hole, you'll want to push down that reset switch as soon as possible and play another round! This game is my favorite sports game on the system, hands down, and is leaps and bounds superior to the regular Golf game that appeared on the VCS two years later. It's a darn shame this game was only on the market for a few years and is not very well known today.

If you don't have it in your collection, expect to pay around $5.00 for it. That's what I paid for it. Atari Age gives both Miniature Golf and Arcade Golf a rarity of 3 out of 10, making it a little less common than some other Atari 2600 games. It's not very sought after, so you should be able to pick it up for cheap. The physical cartridge of the sequel Miniature Golf Plus will cost you $25.00.

Miniature Golf is an easy top-ten game on the system. I highly recommend playing it.