Disclaimer: At the time of writing this, I have not played Super Mario 3D All-Stars for the Nintendo Switch. I have, however, played all three games included in this collection. This blog is about my thoughts on the game from things I have seen online. For this blog, I will not be covering the original titles in this collection, rather focusing more on the collection itself.

Calling this new collection Super Mario 3D All-Stars is deceiving, as it implies to people that played the original collection that these games were remade for the Switch, which they weren't. Nope, the games in this compilation are just, for the most part, the original ROMs slapped on to the Switch for $60. There were minor changes, which I will list now:

Super Mario 64 is a true classic. This game is great to this day, though it is starting to show its age. Super Mario 64 DS, in my opinion, remedied a lot of these flaws and added a lot more value to the overall package, including four other characters, more levels, sharper and more modern graphics that shine on the tiny DS screen, and thirty extra Power Stars to collect. The one flaw with this package is the lack of an analog control stick, which is a deal-breaker for many. I hoped that Nintendo would base their remake off of this version while 3D All-Stars was still nothing more than a rumor. Unfortunately, Nintendo uses an older version of the game with only Mario, 120 Stars, and worse textures and character designs. At first glance, you might think this is based off of the classic Nintendo 64 game we have all played before, but you'd be mistaken. This version of SM64 is actually based off of the Japan-only Shindou edition, an update of the game we never saw in North America. This edition fixed some bugs in the Japanese release of the game, such as the oft-utilized backwards long jump glitch, as well as adding rumble pak support. Some minor things were changed as well. For instance, when Mario jumps on to a tree or climbable pole, he will swing around to face the camera. The infamous "so long, gay bowser" line was also removed and replaced with just a plain "bye bye", which I believe was also present in the DS version. I don't remember as I'm usually a Luigi player.

So what about the Switch version? The game appears to be running fine from what I can tell. Sadly, unlike the other two games on this collection, this game still plays in a 4:3 aspect ratio. The game is not near as pixelated as before as it is being upscaled to high definition. Actually, all three games are just upscaled versions of their originals, with widescreen in the case of Sunshine. Same models, same everything. Disappointing.

Super Mario Sunshine is a very controversial game and one I didn't much care for until recently. I always thought this game would look pretty in HD, which it does. Problem with this game, though: it doesn't support the GameCube controller. I mean, sure, you can use it, but it isn't going to work very well at all. The controls are mapped all differently from what they originally were. Why does it matter, you ask? Well, the GameCube controller has a very special feature that no other Nintendo controller, past or present, has. Analog trigger controls, and Super Mario Sunshine made full use of these in the original release. That's a bit of a problem. I don't know how they accomplished it, but I'm sure it's fine on the Switch, though probably not near as simple and elegant as the original. Why they did this is beyond me. Another problem with Sunshine is that the game is still the same frustrated mess as it was on GameCube, and this "remake" did absolutely nothing to try and help relieve some of the frustration present in this game. Like, just add a blue coin counter. Jeez, Nintendo. They had an oppurtunity to fix this game and they didn't. Sunshine had real potential to be the best 3D Super Mario game, but was held back by these flaws that could have been fixed but just weren't.

I can't speak much for Super Mario Galaxy. I haven't played the game in years, and don't remember having much fun with it. My sister thoroughly enjoys it, and I know it's a favorite for many others. I just haven't really played it. The game utilizes the different features of the Wii Mote for many things in the game, such as the spin jump and shooting Star Bits with the pointer. I'm glad that the spin jump is finally mapped to a button, though aiming the Star Bit shooter thing looks incredibly cumbersome with the second analog stick (or touch screen in handheld play). I really can't speak much for Galaxy. The graphics looked nice for the Wii, and they look nice here as well

Super Mario Galaxy 2, for some reason, isn't a part of this collection. What a waste.

At least two of these games are handheld for the first time, but they are far worse to control from what I can tell. I have also heard that there isn't an inverted camera, which kind of sucks. The collection is a whole $60 for these three barely-modified games. Crash Bandicoot and Spyro the Dragon had actually remastered compilations for only $40. Mario's a bigger name, however, and his games are for the most part held in higher regard. If you bought this collection for $60, you'd be getting your money's worth as the games are spectacular masterpieces, but there was still little effort put into this this compilation. Just three upscaled ports. If you have these games already, I don't think this collection is worth it. Especially if you have the DS remake of Super Mario 64, which looks nicer, has more stuff, and is still just as portable if not more so. If you really need to play Galaxy and Sunshine on the go, then buy the game. Otherwise, it's a bit of a ripoff.

Every modern collection needs some goodies. Kirby's Dream Collection had some minigames based off of Return to Dreamland as well as an in-depth history of the series. Atari Anthology on XBOX had scans of all of the manuals and promotional materials, as well as interviews with Atari folk. They even had little extras thrown in like Trippy Mode and some other graphical hacks and fun modes. What does 3D All-Stars have?

Three soundtracks with the least amount of effort put in. You can't even rewind them or fast-forward. I normally use my DSi for music, but a Switch seems so bulky and stupid for a music player. It can't fit in your pocket with ease. At least you can turn off the screen and let it play, but still, it's a very bad music player. These are the only extras you get.

Let's address the elephant in the room. This is a limited six-month release in both physical and digital forms. After March of 2021, you can't buy a physical cartridge of this game or buy it digitally off the eShop. This is stupid. Why, Nintendo? This is probably like the amiibo and NES classic system where Nintendo is creating the scarcity itself in order to pressure consumers into buying the game right now. This time it's a little different, however. Many people aren't in a good place financially right now and can't afford the game because of the pandemic. It's pretty crappy of Nintendo to do this at the moment. And who could forget about the eBay scalpers? 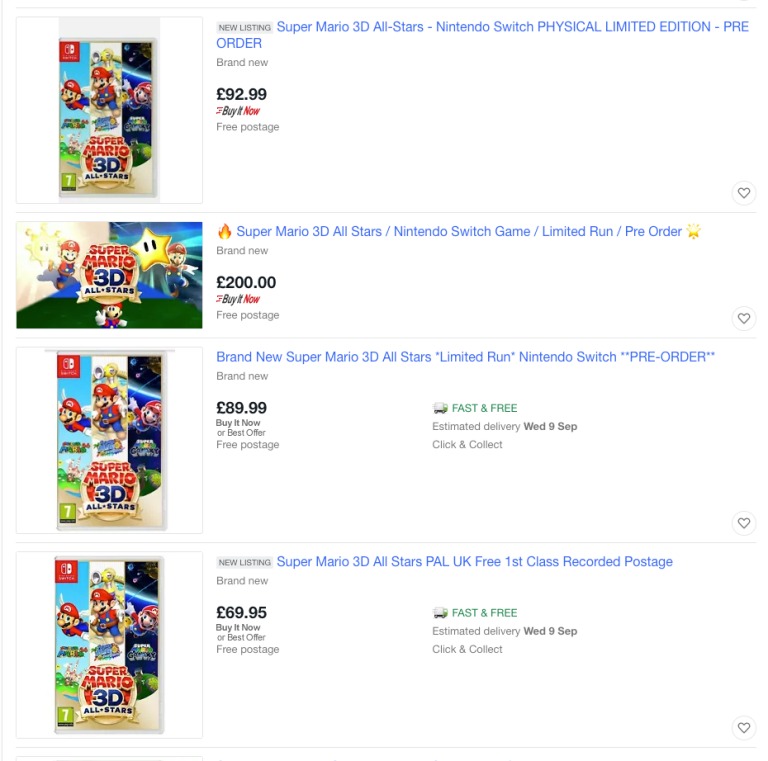 My guess is that Nintendo is trying to just get people to buy and aren't actually going to discontinue it. They said they would discontinue the NES classic, and then they started making it again, remember? I'm 95% sure this game isn't going anywhere.

But, will you buy it? I'm probably not going to. I have better versions of all three games in my collection. Are they as pretty? No. But do they really need to be? I could spend that money on so many other games.

What do you think of 3D All-Stars? Has anyone here played it?