So the other night my family and I sat down and watched the hit 1997 film Titanic. My parents always talked about how much they hated it, but last night is when us kids finally got the chance to see it.

I will say, parts of the movie are really well done. I have always thought the Titanic disaster was interesting, and my mother has as well. She knew a lot about it, to my surprise, and pointed out a few Easter eggs in the movie that would have gone over my head otherwise. For instance, there was one scene where the ship designer (I believe it was him) was staring into a fireplace or something, which was where he was supposedly last spotted. There was lots of stuff like that scattered throughout the film.

The set design was also astonishing, and very accurate to the real-life design of the ship. I have seen what the vessel actually looked like from documentaries, pictures, footage of the wreck, et cetera, and the movie did a very good job replicating the original design.

But the thing that completely ruined the whole movie for me was the horrible main story.

The story! Jack, the stereotypical "poor boy" love interest character, and Rose, the stereotypical "rich girl loves boy below her social class" character. The whole thing is incredibly cliche. The two are "soulmates" and are so deeply in love, even though they have only known of each other's existence for less than a week. But no, just THROW THE NECKLACE IN THE WATER FOR YOUR DEAD PAL FROM 85 YEARS AGO, ROSE! And when you die, go make out with this dude you knew for like three days almost a century ago. Your husband you were married to for years? Screw him!

And that stupid song! That song has been "memed" to death, and has been paired with so many stupid things over the years on the internet. I honestly can't take anything with that song in it seriously anymore, and since the story is so bad in the first place, the whole thing seems ironic to me. The song is so overused these days and paired with such stupid things, and the story qualifies as a stupid thing. It's not like it's a bad song or anything, it just doesn't carry the same emotional value that it did 20+ years ago. It is pretty cool that it was recorded in one take. 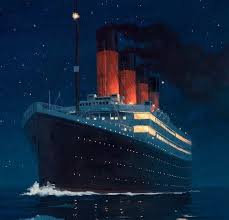 You know, not many people know about this (including myself until yesterday), but there was actually a Titanic movie as far back as 1912. Yeah, it came out only 29 days after the tragedy occurred! Imagine someone releasing a 9/11 movie in October of 2001! How insensitive and horrible for the survivors! That's waaaaaay too soon to make a dramatization on such a contemporary and tragic incident.

"Saved from the Titanic" starred a real Titanic survivor (who sadly experienced many emotional breakdowns on set) and even experienced with color in a few scenes. Unfortunately, all known copies of the film were destroyed in a fire in 1914, though it is rumored that a copy was given to president Taft and that it may still be preserved in his presidential library. A fake copy of the movie is currently on YouTube, though that isn't the original. Only the movie posters and a couple of stills exist today. So anyway, what were we talking about again? Oh, yes, our game!

When I was watching Titanic, I couldn't stop thinking about a certain Super Nintendo game I used to play back in the day called SOS. I didn't play the game as often as others (like Super Metroid, F-Zero, or Mortal Kombat II), but I had played it a bit and enjoyed it. It was a very hard game, and I never did get too far in it. So I decided to try it out again after watching the movie, as it had been a while and my video gaming skills had improved drastically.

SOS has a copyright year of 1994 and was published by Vic Tokai here in the USA. The game was developed by Human Entertainment, who is probably best known for the cult classic Clock Tower. SOS is not to be confused with the other SOS game on the Super Nintendo, SOS: Sink or Swim! The two are completely unrelated from what I can see.

Though this game reminded me of the Titanic disaster, the game's story is actually quite different than the events that occurred in 1912. From research I have done, SOS drew heavy inspiration from the novel and film "The Poseidon Adventure". Rather than an iceberg becoming the ship's undoing, there's a violent storm in which the boat, Lady Crithania, is capsized. The game is also set in the early 1920's rather than the early 1910's.

So what's the gameplay like? I'm glad you asked. At the beginning of the game, you have a choice of several playable characters, each with their own backstory and in-game goals. For instance, Dr. Jeffery Howell will need to rescue his wife as his main objective. You have one hour in real time to escape the ship with as many survivors as possible. The ship will rotate randomly using some nice Mode Seven techniques, and that can either help or hurt you. The game plays like a Metroidvania, and there is no combat in the game. All you need to do is avoid obsticles such as fires, sparks, and falling from too great a height. If you die in the game, you'll be deducted five minutes from the in-game timer. If you're still in the ship when time is up, your game is over. Because off all of the different characters and endings, the game is very replayable.

The level design is very much like a ship that's sinking. You have your broken tables, sparks, fires, carcasses, WATER of course. The thing that makes the level design hard is that the ship is constantly rotating and you play most of the game upside-down. The stiff controls also add to the challenge. Some say these controls ruin the game, though I feel they add to it. You're a random dude on a sinking ship, not an athlete. If you had Samus Aran's controls from Super Metroid, this game would be a breeze to complete. I feel the level design fits the controls well, and nothing seems particularly undoable. So, what are the problems with the game? It can't all be positive.

As previously mentioned, the controls can make the game very frustrating at times. I have found myself draining my time very quickly because I kept dying due to the ship's unpredictable rotations. I understand why they made it this way, but that doesn't mean it can't be frustrating. Another thing that can be annoying is the absence of an in-game map. Expect to get lost a lot. Again, the ship's turning also makes it harder than it needs to be, as it can be very disorienting. The A/I of the survivors you rescue is also pretty bad. It isn't obvious at first, but you need to keep hitting a button to get them to follow you around. Just keep hitting "L", and they'll follow you. It's not too big of a problem, but it can get mildly annoying at times.

Strangely, this game commands quite a high price. When I was cataloging my collection via Pricecharting.com, I was pretty surprised when I found out this game's value. SOS, loose,  goes for about $70 according to the site. Thanks, Dad, for not selling your games!

This game also got a Japan-only sequel on the PlayStation.

So would I recommend it? While SOS is a great hidden gem on the system, I simply can't recommend it because of the price. Is it a fun game? Yes. Am I glad I have it? Yes. But it's simply too much to pay for the game. While it's a great game, this is the SNES we're talking about here. This thing has a killer library of classic games like Super Metroid, A Link to the Past, and Super Mario World. So, for the system it's on and what it's up against, I'll have to rate it relatively low. Lower than I would like to otherwise.

So, for the system it's on, SOS gets a 7/10 from me. If you find this one for a reasonable price in the wild, don't hesitate to pick it up and give it a go. It's a pretty great game, though it's not Super Metroid!

I will say this: it's leaps and bounds better than the Titanic movie!