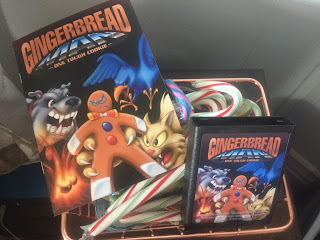 Gingerbread Man
Developer:  Fred Quimby
Available:  https://atariage.com/store/index.php?l=product_detail&p=867
I had not intended for this review to coincide with any cookie appropriate holidays, however it timed out so that I was playing Gingerbread Man during the Christmas season, so I’ll let you decide if that’s timely or trite, whichever suits your fancy.  There was considerable hype around this game when it came out and it still gets a nod now and then as a top notch platformer for the system so I was long overdue in checking it out.

Gingerbread Man is a video game interpretation of the famous fable about a baked good that sprang to life and attempted to elude those that would eat him.  In this version you must navigate five treacherous screens evading enemies and collecting items to help make good your escape.  You take control of the enlivened unleavened cookie while he is still in the oven and flames are dancing all about.  Once freed from the oven you must make your way out of the house and as far away from danger as possible, yet somehow trouble always finds you!  And if you succeed in completing all five screens, it’s back in the oven for you to do all over again, only this time harder.  Much harder.  If you can battle through all 19 levels, you will come face-to-face with the final boss and perhaps win your actual release.

Hard.  Really Hard.  Gingerbread Man features all of your platforming standards: tricky jumps, relentless foes, and fast-paced action.  Controls are smooth and despite a few awkward playfield collisions the physics are solid.  Where the game separates itself from the pack is in its difficulty.  Gingerbread Man is a very difficulty game.  The jumps are unforgiving and the enemies are strategically placed to create the most problems.  While the collision detection with the playfield can be a little fast and loose, the collision detection with the enemies is crisp.  You’ll not be able to get by barely grazing a cat’s ear or bird’s wing.  If you even think you’ve made contact with an enemy, you’re dead.  To compound all of that there is a time limit for each level and you are awarded no extra lives.  Hard.
One of Gingerbread Man’s strongest assets, however, is level design.  Each screen features a totally unique game mechanic and win device.  In the first level you must collect bits of burnt cookie to vanquish fire balls while dodging fire jets. (oh!  What an oven!)  Level 2 requires you to collect balloons with which to float out of the house while a cat and dog prowl the area trying to eat you.  In level 3 you must avoid two cats and a bird while collecting roof tiles to build a bridge to a nearby tree.  The fourth level is truly unique in that the goal of the level is to obtain a worm resting on a tree branch and then feed it to the baby bird high in the tree tops.  To reach the worm you have to increase your weight by gathering falling leaves and lowering trampoline-like tree roots to the appropriate height for a well-timed jump. The final level might be the easiest.  You have to jump about the cave and collect loose stones and throw them at the bird and cat.  Three successful hits and you’ve won!
If surviving those five levels wasn’t hard enough, once you succeed you are cast back into the oven and the difficulty ramps dramatically.  There are more fires in the oven, more balloons to collect in the dining room, and so on.  I have not been able to survive all 19 levels to get to the final boss, but if the rest of the game is any indication, he’s no treat either. 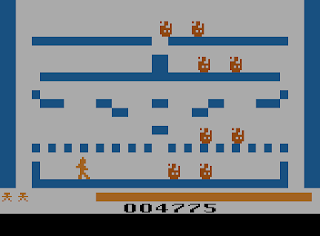 Not much.  Like most modern homebrew games, Gingerbread Man features a nicely illustrated full color manual.  Graphically the game is simple, but honestly that all this game really wants.  There is a CONTINUE feature to give you an opportunity to practice higher levels and there are three game variations (a feature far too infrequent in modern homebrews) including a version for children, or perhaps more appropriately, first time players.  One nice little feature is that when you continue, your score turns black instead of the default white to indicate that you have used the feature.  This keeps non-continued scores pure.  That’s a smart feature that more games should employ.

If you have ever used the term “guide game” in something other than a derogatory fashion, Gingerbread Man is probably not the game for you.  It’s difficult, very difficult.  In about three dedicated hours of playing I only managed to make it to level 7, and only then by exploiting the CONTINUE feature.  This is platforming at its most challenging.  You must be precise with your jumps, you must give enemies a wide berth, and your timing must be impeccable.  There is no way to slop your way through this game.  That means you are going to be playing the first three levels many, many times.  With enough practice you will get good at Gingerbread Man, but no one is going to hold your hand along the way.  The game’s strength lies in its varied level design and gameplay.  While each level is based on the “collect and avoid” game mechanic, that device is never used the same way twice.  This makes for a fun play and helps you overcome the frustration that can result from the heightened difficulty.

Let’s take this screen-by-screen:
The Oven:  Work from the bottom up.  The lower flames are the hardest to kill because when you throw the cookie bits, you throw them in an arc like a basketball shot.  This makes attacking the higher ones from underneath very easy (you also get less points), but taking out the lower ones, a challenge.  Since the last remaining fireball doubles in speed, you don’t want the bottom fireball to be that guy.  So take out the lower ones first and then work your way up. 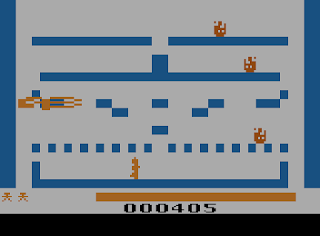 The Dining Room:  This is perhaps the game’s weakest screen.  Timing with the dog and cat is rigidly precise and there is little room for error.  You are best to let the dog make a full transit of the room and jump over his head twice before you leave the chair you start on.  Once you get past the dog, don’t dally on the tabletop, get up on the light fixture and plot out how to gather the balloons most effectively.  One of the reasons I feel this is the weakest level in the game is due to the fact that some of the balloons are completely obscured by the playfield and the only way to obtain them is to jump from precisely the right spot and collide in just the right way with the playfield to register that you have collected the balloon.  This seems unnecessary as the balloons could easily be placed in challenging positions on the screen that are not obstructed by playfield.  You’ll want to figure out exactly where to stand and when and where to jump to force the collection of the balloons.  I recommend saving balloons that require you to land on the floor for last.  Typically I work the left side of the screen and then finish with the balloons on the right.
The Roof:  This is a great screen.  Roof tiles will appear at random all over the roof and the bird and cats will provide plenty of interference in collecting them, however I strongly recommend staying on top of the roof until you see where the roof tile appears.  Sometimes you will get lucky and be able to avoid the cats altogether if the tiles appear on the upper half of the screen.  Each time you place a tile on your bridge wait to see if you can easily collect the next one without too much peril.  This is also the screen where it is essential that you learn the “duck jump.”  Thankfully, in this game you can jump from the ducking position.  This means you can squeeze between the top and bottom cats without being absolutely perfect in your timing.  You will use this a lot in this level and in the dining room to avoid cats above you. 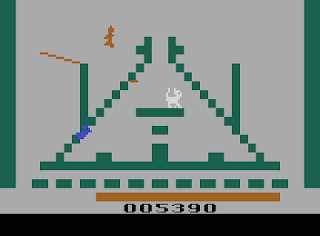 The Forest:  And now for something completely different.  The basic tip from the roof works here as well.  Stay high in the tree tops while you wait for the leaves to fall.  Snag them as quickly as possible to avoid unnecessary trips to the forest floor and encounters with the cat.  Work the roots consistently until they are low enough for you to bounce and get the worm.  There really isn’t much cause to aggravate the baby bird, so the mother bird’s wanderings should only provide minor difficulty. 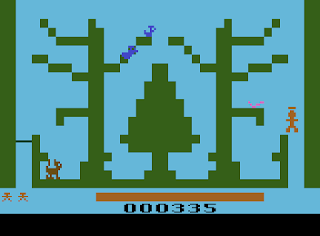 The Cave:  Jumping here is tricky as the stones in the wall are spaced just far enough apart that an imprecise leap will find you on the floor.  Take advantage of the rising air currents whenever possible instead of attempting finicky jumps.  Loose stones appear just about everywhere so try to stay high on the screen (seeing a pattern in the later levels?) so you can collect them without bothering the cat too much.  You throw in an arc again so hitting the bird will be easier than hitting the cat. 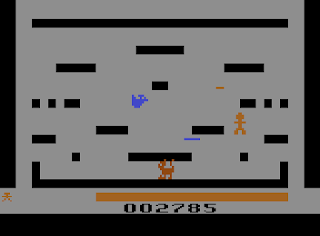 Final Tip:  Take advantage of the CONTINUE feature to practice harder levels before you try playing for score.  In Game Variation 1 you can continue up to level 14 and in Game Variation 2 (SUPER HARD) you can continue indefinitely, but lose all progress in a level when you die.  Trust me, you want the chance to familiarize yourself with the later screens before you make an honest run at the boss.
So there you have it.  An extremely challenging platforming game the likes of which I have not played since Hunchy II.  Gingerbread Man isn’t going to be for everyone, but for those of us who love a brutal platformer, this one will always scratch that itch.