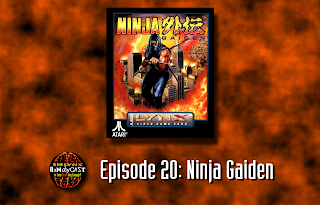 In this episode I cover one of the best arcade ports ever released for the Lynx, Ninja 外伝 Gaiden, released for the Lynx in 1991. Included are statistics for the game and a run-down on how to play it, along with reviews and ratings, some fun facts and trivia, and lots of listener feedback about the game. Also in today’s episode: Monty displays his prowess as a Supreme Verbal Ninja…whatever that is.

“I know not one whit of sarcasm.” -Monty

NINJA GAIDEN VITAL STATISTICS
Release Date: July of 1991.
Initial Retail Price: $38.99-$39.99 in the US, and £29.99 in the UK.
Cartridge Information: 256kB mono curved lip-style cartridge.
Game Genre: Side-view 2-dimensional scrolling action beat-’em-up game for 1 player.
Screen Playfield Orientation: Landscape (horizontal).
Based On: The arcade cabinet Ninja Gaiden released by Tecmo, Ltd. in late 1988 in North America and Europe, and in January 1989 in Japan. The cabinet was named Arcade Game of the Year for 1990.
Alternate Title: Shadow Warriors was the title given to the Ninja 外伝 Gaiden arcade cabinet for its release in Europe.

Sequels: Ninja 外伝 Gaiden III: The Ancient Ship of Doom (Atari Lynx; 1993; this was a port of the NES version of Ninja 外伝 Gaiden III: The Ancient Ship of Doom).
Ports to Other Systems: Ports of Ninja 外伝 Gaiden were also released in Europe (as Shadow Warriors) on the Amstrad CPC, the Atari ST, the Commodore Amiga, the Commodore 64, and the ZX Spectrum. Elsewhere, the game was also ported as Ninja 外伝 Gaiden to the DOS platform, the Nintendo Switch, the Nintendo Wii, and the PlayStation 4. Many other versions and permutations using the Ninja 外伝 Gaiden name and general concept were ported to home consoles and computers, but they generally bear little resemblance to the original arcade game (the NES version is the most notorious in its apparent lack of similarity to the arcade game).
Game Levels: There are four stages, or neighborhoods, in Ninja 外伝 Gaiden: the City Streets, the Casino Moto, the Train Station, and the Palace.
Packaging: A full-color standard flap-tab regular-size box (5 3/8″ by 4 3/8″ by 7/8″), with parallel verbiage on the back in both English and French.
Instruction Manual: Ninja 外伝 Gaiden was packaged with a full color poster, 22” high by 17” wide (see photo above After-Market and Home Brew Lynx Titles). The front of the poster includes an exact copy of the box cover art, with a yellow triangular banner added at the upper left with the words See reverse side for instructions in a large black font tilted upwards at a 45 degree angle. The back of the poster includes an illustrated comic book-style list of basic instructions. The posters, released in both English and in French, were folded several times in order to fit in the small Lynx boxes. The instructions for Ninja 外伝 Gaiden were written by Scott Rhoades.

Be sure to check out our partner AtariGamer.com to stay “Lynxed In” to all of the latest news about our favorite handheld gaming console! 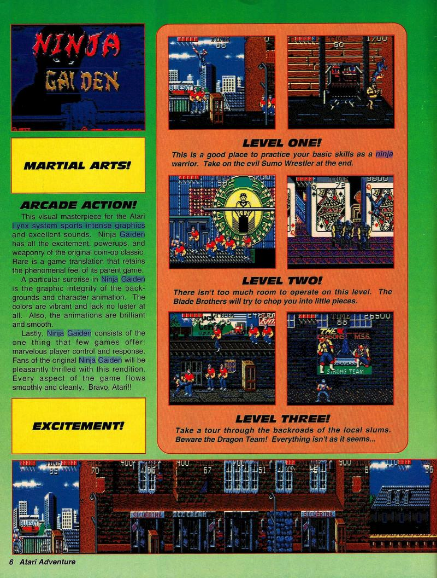 Page 1 of the release announcement about Ninja 外伝 Gaiden for the Lynx in the Atari Adventure insert of Issue #21 (April 1991) of Electronic Gaming Monthly magazine. The game was released in July of 1991. 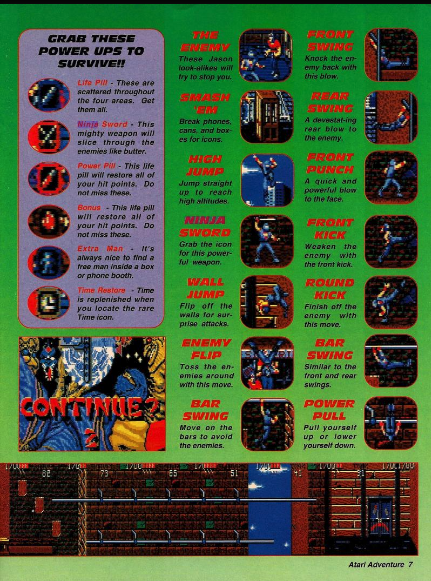 Page 2 of the release announcement about Ninja 外伝 Gaiden for the Lynx in the Atari Adventure insert of Issue #21 (April 1991) of Electronic Gaming Monthly magazine. This page has more useful information about how to play the game than did the poster/manual that came with the game. 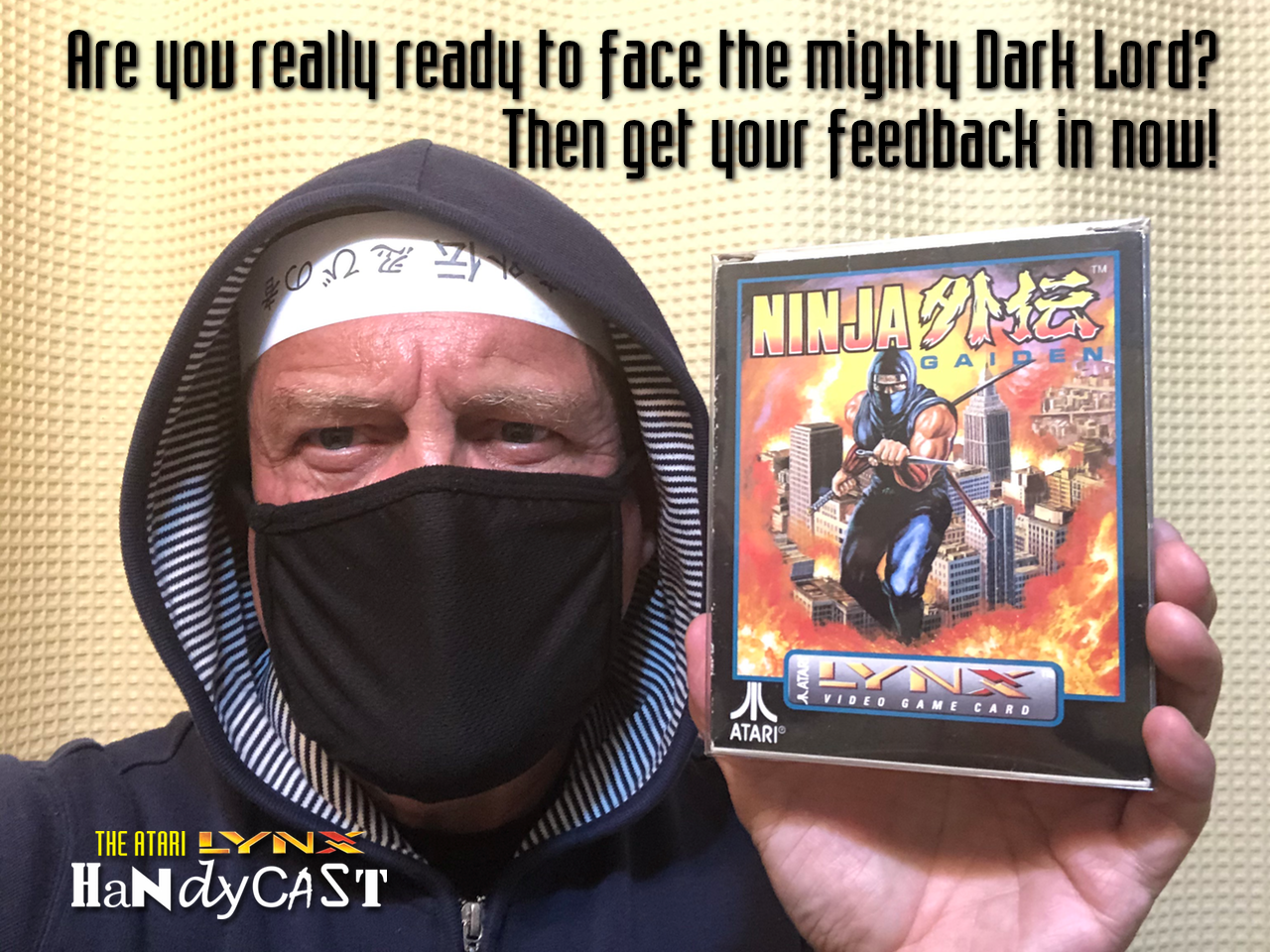 My goofy feedback solicitation photo for this episode. Note that I am unwittingly wearing the headband with Japanese characters written on it upside down. 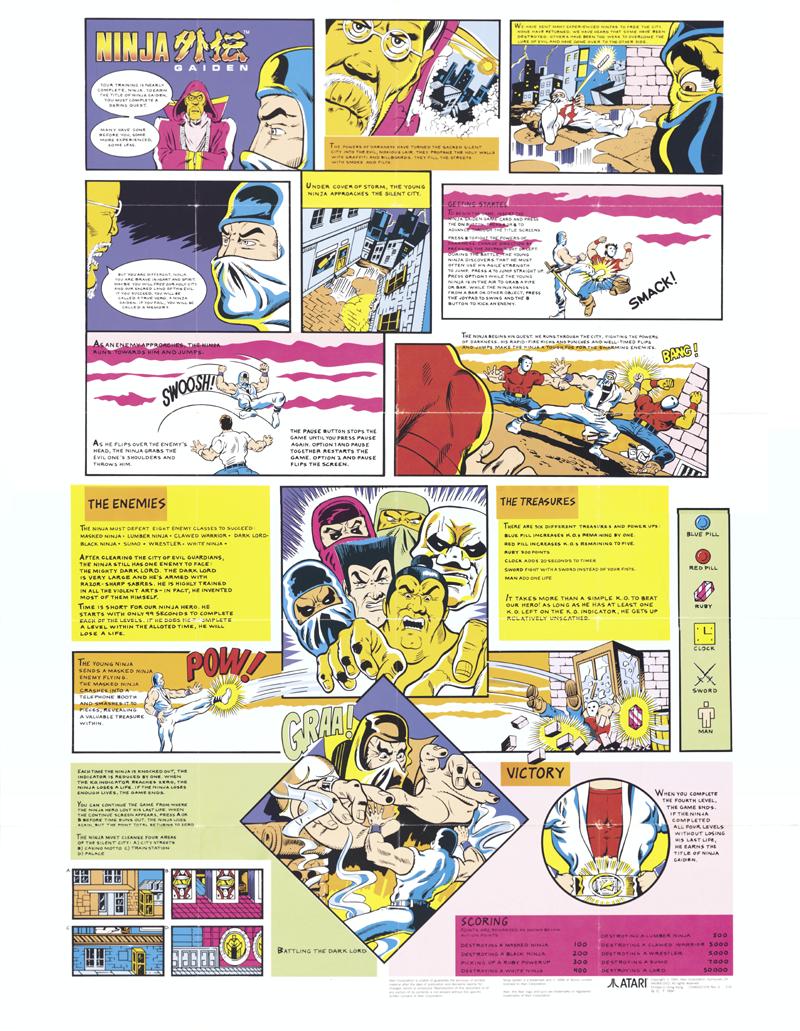 Also, I would like to thank the Free Music Archive for the following musical artists and songs that were used in this episode under the Creative Commons Attribution 4.0 International License: “8-Bit Core” by Tagirijus (opening and closing theme music), along with “Hachimantei Snow,” “Just Wondering,” “Salt Lake Swerve,” “Salt Lake Swerve – Chillout Remix,” “Swirling Snowflakes – Finale,” “Tuesday Night,” and “Tuesday Night – Radio Edit,” all by Maarten Shellekens.

Thanks also to Elvira, Mistress of the Dark (Cassandra Peterson) for the “Oooh, let’s party!” and “Leaving so soon?” digitized speech clips captured from the Atari Lynx game Pinball Jam that are used at the beginning and end of each episode of The HandyCast.

I would especially like to thank Shinto for submitting his memories of various Atari Lynx games he’s owned in the past to The Atari Lynx HandyCast…they are greatly appreciated. And you should all check out Shinto’s wonderful Atari Jaguar Game by Game Podcast; it’s definitely worth listening to, even if you’ve never owned a Jaguar. You can find it here.

Finally, my thanks to the Podfather himself, Ferg of The Atari 2600 Game by Game Podcast. His inspiration and dedication to covering every game cartridge ever made for the Atari 2600 (I think over 1000 of them!) is what gave me the courage to begin this podcast. Please, check out his don’t-miss podcast, even if you’re not an Atari 2600 collector; you should also visit his website here.