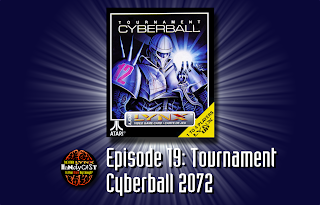 In this episode I cover the first of two American-rules football games for the Atari Lynx, Tournament Cyberball 2072, released in 1991. Included are statistics for the game and a run-down on how to play it, along with reviews and ratings, some fun facts and trivia, and some listener feedback about the game. In the previous episode, Monty and I discussed the differences between soccer and American football (I’m still unclear about that). In today’s episode, we banter about the differences between robots and androids. Such fun! 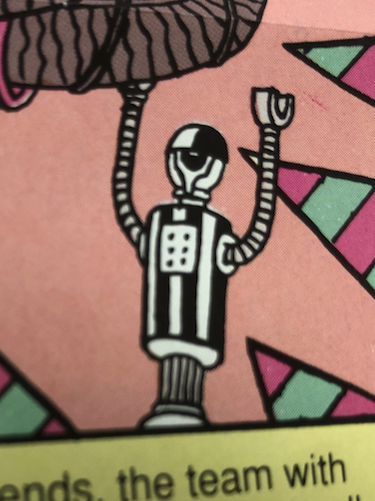 Did Bender (with a Tom Servo torso) from FUTURAMA make a cameo in the Tournament Cyberball 2072 poster manual…eight years before FUTURAMA premiered?

TOURNAMENT CYBERBALL 2072 VITAL STATISTICS
Release Date: October of 1991.
Initial Retail Price: $38.99-$39.95 in the US and £27.49 in the UK.
Alternate Titles: Tournament Cyberball and Cyberball 2072. The splash screen displays the title as Tournament Cyberball 2072.
Cartridge Information: Monaural curved lip-style cartridge of unknown ROM size.
Game Genre: Top-down-view 2-dimensional scrolling futuristic sports game for 1 player, or for up to 4 players (cooperatively or competitively) using the ComLynx cable.
Screen Playfield Orientation: Landscape (horizontal).
Based On: The arcade cabinet Cyberball 2072, released by Atari Games in 1989. The arcade game was released either in two-player cabinets with one screen, or in four-player cabinets with two screens. The latter version was called Tournament Cyberball 2072.
Sequel to: The arcade cabinet Cyberball, created by John Salwitz and released by Atari Games in September of 1988, which was based on the American field sport of football.
Ports to Other Systems: Cyberball 2072 was also ported to the XBox 360 in 2007.
Game Levels: Six 5-minute periods.
Packaging: A full-color standard flap-tab regular-size box (5 3/8″ by 4 3/8″ by 7/8″) with parallel verbiage on the back in both English and French. It was released in both English and French variants. The French variant was identical to the English box, but it also included the ‘DEFI LYNX’ brochures including the Atari Lynx shaped brochure and free DEFI LYNX pins (pin’s gratuit).
Instruction Manual: Tournament Cyberball 2072 was packaged with a full color poster, 22” high by 17” wide. The front of the poster includes an exact copy of the box cover art, with a yellow triangular banner added at the upper left with the words See reverse side for instructions in a large black font tilted upwards at a 45 degree angle. The back of the poster includes an illustrated comic book-style list of basic instructions with parallel verbiage in both English and French. The posters were folded several times in order to fit in the small Lynx boxes.

Be sure to check out our partner AtariGamer.com to stay “Lynxed In” to all of the latest news about our favorite handheld gaming console! 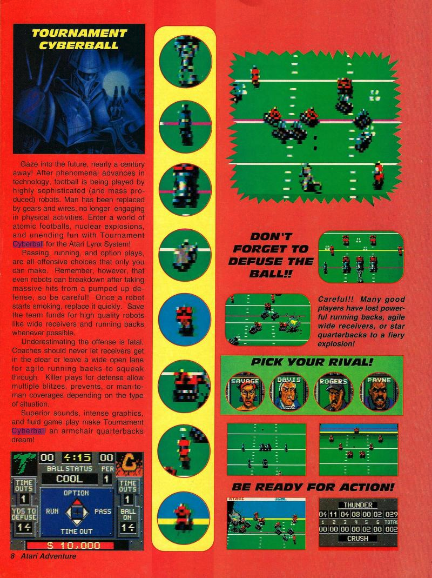 Release announcement about Tournament Cyberball for the Lynx in the Atari Adventure insert of Issue #21 (April 1991) of Electronic Gaming Monthly magazine. The game was finally released six months later in October of 1991. 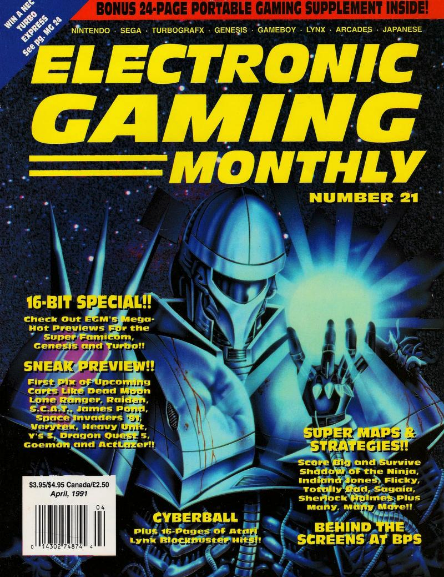 The box cover art of the Atari Lynx port of Tournament Cyberball 2072 graced the front of the April 1991 issue (#21) of Electronic Gaming Monthly magazine.

Also, I would like to thank the Free Music Archive for the following musical artists and songs that were used in this episode under the Creative Commons Attribution 4.0 International License: “8-Bit Core” by Tagirijus (opening and closing theme music), along with “Apex,” “Bam,” “Disquiet,” “Hiatus,” “Hitting the Wall,” “Mount Fuji,” and “No-one Around,” all by Bio Unit.

Thanks also to Elvira, Mistress of the Dark (Cassandra Peterson) for the “Oooh, let’s party!” and “Leaving so soon?” digitized speech clips captured from the Atari Lynx game Pinball Jam that are used at the beginning and end of each episode of The HandyCast.

I would especially like to thank Shinto for submitting his memories of various Atari Lynx games he’s owned in the past to The Atari Lynx HandyCast…they are greatly appreciated. And you should all check out Shinto’s wonderful Atari Jaguar Game by Game Podcast; it’s definitely worth listening to, even if you’ve never owned a Jaguar. You can find it here.

Finally, my thanks to the Podfather himself, Ferg of The Atari 2600 Game by Game Podcast. His inspiration and dedication to covering every game cartridge ever made for the Atari 2600 (I think over 1000 of them!) is what gave me the courage to begin this podcast. Please, check out his don’t-miss podcast, even if you’re not an Atari 2600 collector; you should also visit his website here.