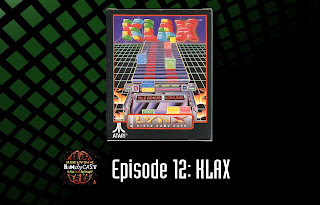 #PA2031, Published by Atari Corp.
In this episode (better late than never) I cover one of the best games ever made for the Atari Lynx, KLAX, released in October of 1990. It's also the second of three original release titles for the Lynx that is played vertically, not horizontally (Gauntlet: The Third Encounter and NFL Football are the other two). In this episode I've got vital statistics about KLAX, along with credits, gameplay, reviews and ratings, some fun facts and trivia, and some listener feedback about the game.

Earlier in 2019, James Boulton from RetroHQ, better known as SainT, released the next batch of his highly sought-after Lynx SD multicart to those who pre-ordered it on Atari Age. The firmware in this version includes the new Menu Loader 2, created by Igor Kromin of AtariGamer.com (with help from Alex Thissen of Diary of a Lynx Developer and Karri Kaksonen of White Lynx). The cost of the cased version, which fits into the Lynx II only, or for the uncased version, which fits into either the Lynx I or the Lynx II, is £70, plus £2 shipping inside the UK or £5 shipping outside the UK. To get on the pre-order list for the next batch of multicards, which will be renamed the Lynx GD (for Lynx Game Drive), simply add a post to the RetroHQ posting in the Atari Age Lynx Forums here. Be sure to indicate Lynx I or Lynx II, cased or uncased.

Nintendo Game Boy modder BennVenn is currently producing an LCD screen upgrade for the Atari Lynx II model that undercuts the cost of the McWill LCD upgrade (currently around US$125 sans the shipping from Germany) by at least half. BennVenn's version does not include the VGA output mod, which McWill includes in his kit. Right now, only the drop-in screen for the Lynx II is available; the screen for the Lynx I model will be available later. As of this episode's recording date, interested Lynxters are able to purchase the Lynx II screen when it is not sold out; check here for availability. The price is US$50 for the Chinese-manufactured screen or US$60 for the Japanese-manufactured screen. For an additional US$5, Lynxters can also purchase the recommended 3D-printed frame bracket for the screen that was created by Igor at AtariGamer.

In August of 2019, Songbird Productions announced the acquisition of multiple classic gaming properties, including: the entire HandMade Software library, except for Kasumi Ninja, including games such as Awesome Golf, Jimmy Connors' Tennis, Loopz, Malibu Beach Volleyball, Power Factor, and a limited license for Battlezone 2000; Battlemorph by ATD; Gordo 106 by Tenth Planet Software; a limited license for Super Skweek by Loriciel; and Othello by Harry Dodgson. Carl from Songbird Productions says on his AtariAge Lynx forums post: "I don't have imminent plans for most of these games, but thought it was worthwhile to build my IP library when the opportunities came." Congrats to Karl, and many thanks to him for nearly 30 years of his company's commitment to the Atari Lynx!

Also, I would like to thank the Free Music Archive for the following musical artists and songs that were used in this episode under the Creative Commons License: “8-Bit Core” by Tagirijus (opening and closing theme music), along with "Clear Progress," "Driven to Success," "Inspirational Outlook," "Little Idea," "Origin I," "Origin II," and "Upbeat Party," all by Scott Holmes.

I would especially like to thank Shinto for submitting his memories of various Atari Lynx games he's owned in the past to The Atari Lynx HandyCast...they are greatly appreciated. And you should all check out Shinto's wonderful Atari Jaguar Game by Game Podcast; it's definitely worth listening to, even if you've never owned a Jaguar. You can find it here.

Finally, my thanks to the Podfather himself, Ferg of The Atari 2600 Game by Game Podcast. His inspiration and dedication to covering every game cartridge ever made for the Atari 2600 (I think over 1000 of them!) is what gave me the courage to begin this podcast. Please, check out his don't-miss podcast, even if you're not an Atari 2600 collector; or at least visit his website here.
I hope you enjoy this episode of The Atari Lynx HandyCast. And please don't forget to visit the official Atari Lynx HandyCast website by clicking here!