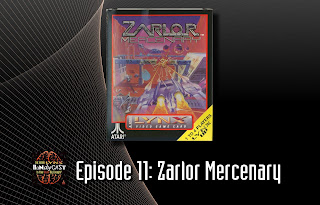 #PA2030, Published by Atari Corp.
In this episode I cover the very last game originally developed at Epyx, Inc., Zarlor Mercenary, released in October of 1990. Alphabetically, it's also the very last original-release game for the Lynx. Plus, as far as I know, it's the only Lynx game that has "Mendicants"...or "Medicants"...or "Merdicants." I've included vital statistics, credits, gameplay, reviews and ratings, some fun facts and trivia, and some listener feedback about the game.
ZARLOR MERCENARY VITAL STATISTICS
Release Date: October of 1990.
Initial retail price: In the US: $34.99; in the UK: £29.99.
Cartridge: 128k (likely) stereo curved lip-style cartridge.
Genre: Top-down vertically scrolling shooter for one player, or two-to-four players using the ComLynx cable.
Screen/playfield orientation: landscape (horizontal).
Other Ports: There were no ports of this game to any other systems.
Sequels: There were no sequels to this game.
Levels: There are six levels, or "Missions," in both the single and multi-player versions of the game: Level 1-Cadmar Desert; Level 2-Mesort Swamp; Level 3-Docrit Sea; Level 4-Sedimor Domes; Level 5-Mardic Ice; and Level 6-Cedmite City.
Carton:  Full-color standard-tab regular-size carton (5 3/8" by 4 3/8" by 7/8"). There were also French and Japanese versions of the carton sold, as well as a blister pack.
Manual: A 20-page (including front and back covers) stapled regular-sized booklet manual in monochrome, measuring the usual 4 7/8” high by 3 ¾” wide.
Languages: As far as I can determine, the manual was available in the U.S. in an English version only.

Ninjabba's At It Again!
Jasper van Turnhout, also known as Ninjabba on Atari Age, and who released his critically acclaimed homebrew game Wyvern Tales back in May of 2018, has now released a new teaser demo that he has developed for what could potentially become another homebrew title for the Lynx. The demo is called Nomad Rally 2018, and anyone interested in viewing the demo in emulation or in downloading it to a multicard can find it here. 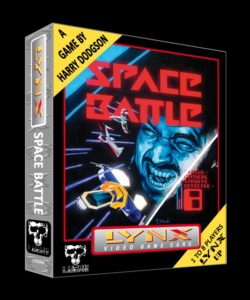 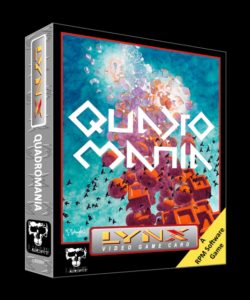 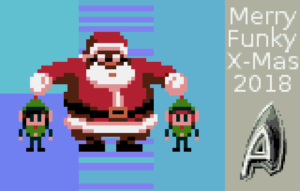 Who Doesn't Want a Funky Xmas?
In other homebrew news, Martin Wendt, Xamil Wolnikowsky, and Bruno Moraes, known collectively as PriorArt, have also released a new homebrew demo for the Atari Lynx; this one is entitled Funky Xmas 2018. Rabid Lynxters may recognize Wendt and Wolnikowsky as two of the developers of the eagerly anticipated upcoming homebrew game Lacim's Legacy. A zip file of this new demo can be downloaded here.

Reviews and Ratings for Zarlor Mercenary:
Review by Clayton Walnum in STart Magazine (US; Issue #39; December of 1990)
Ratings and Reviews by The Review Crew in Electronic Gaming Monthly Magazine (US; Issue #19; February of 1991)
Review by Paul Glancey in Computer and Video Games Magazine (UK; Issue #111; February of 1991)
Review by Les Ellis in RAZE Magazine (UK; Issue #5; March of 1991)
Review by Hawanja at Ultimate Console Database
Review by Robert A. Jung at IGN (1999)
Review by JDeLuna at GameFAQs (1999)
Review by Govvy at GameSpot (2006)
Review by Guuthluhu at GameSpot (2007)
Review by 8BitJeff (Jeff D. Fulton) at 8-BitRocket (2012)
Review by Kyle Knight at AllGame.com (2013)
Review by Jon Mc at Atari Gamer (2018)
YouTube Videos About Zarlor Mercenary:
Music (pieness)
Playthrough (StaxX28)
Playthrough (World of Longplays)
Playthrough and Review (CGRUndertow)
Playthrough and Review (rampboraph4life)
Retailers Selling Zarlor Mercenary:
B & C ComputerVisions: The price lists systems at B &C crashed on 8/3/18 and they have still not been restored, as of this recording date.
Best Electronics (last updated May 31, 2018; check website for availability): US$28.50 (CIB); US$19.95 (loose cart)
The Gamesmen (Australia): AU$28.50 (NIB)
The Goat Store: None Available.
Telegames (UK): £12.49 (listing does not include whether it's a loose cart, cart/manual combo, or CIB)
Video 61 & Atari Sales: US$49.95 (NIB)
After-Market and Homebrew Lynx Titles Now Available:

ACKNOWLEDGMENTS
Thanks go to everyone who contributed feedback about Zarlor Mercenary for this episode: Bobby Tribble, Curtis Herod (Cujo), Eugenio (TrekMD), Scott Tirrell, and Shinto; I really appreciate it!

Also, I would like to thank the Free Music Archive for the following musical artists and songs that were used in this episode under the Creative Commons License: “8-Bit Core” by Tagirijus (opening and closing theme music), along with "Dawn of the Cosmos," "Howling Down," "An Innocent Sword," "Knowing Nothing," "Lion's Haven," and "Waterfalls," all by Mid-Air Machine.
I would especially like to thank Shinto for submitting his memories of various Atari Lynx games he's owned in the past to The Atari Lynx HandyCast...they are greatly appreciated. And you should all check out Shinto's wonderful Atari Jaguar Game by Game Podcast; it's definitely worth listening to, even if you don't own or have never even seen a Jaguar console. You can find it here.
Many, many thanks also go to Zerbinator for his continued support. His encouragement and expertise are very much appreciated by me. You can find all of his fun-to-listen-to podcasts here, including my favorite, Please Stand By.
Finally, my thanks to Ferg of The Atari 2600 Game by Game Podcast. His inspiration and dedication to covering every game cartridge ever made for the Atari 2600 (I think over 1000 of them!) is what gave me the courage to begin this podcast. Please, check out his don't-miss podcast, even if you're not an Atari 2600 collector; or at least visit his website here.
I hope you enjoy this episode of The Atari Lynx HandyCast. And please don't forget to visit the official Atari Lynx HandyCast website by clicking here!
-Mark
Next Episode: "EPISODE 12: KLAX"