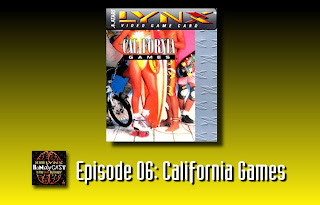 #PA2025, Published by Atari Corp.
In this extra-length episode, I cover California Games, the pack-in/launch title for the original Lynx console in September of 1989. Included in this major episode is a complete rundown of the gameplay, music, and sound effects for each segment of California Games. I also highlight reviews of the game, and I share feedback about the game from some of my loyal listeners. Plus, I also provide information about the prices that collectors can expect to pay for any of the three variations of an Atari Lynx California Games cartridge on eBay, as well as at other online retailers. 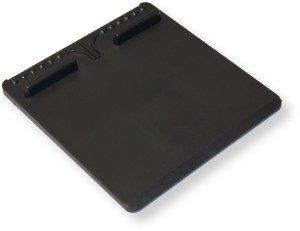 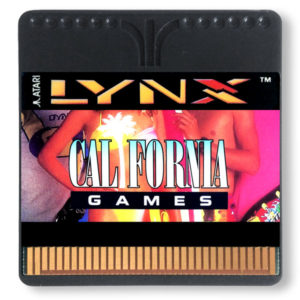 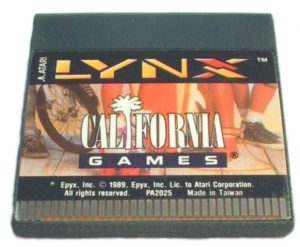 California Games was released in three cartridge variations for the Atari Lynx: flat-style (top left), ridged-style (top right), and curved lip-style (bottom).
CALIFORNIA GAMES VITAL STATISTICS
Release Date: September of 1989
Initial retail price: Originally, a free California Games cartridge/manual was included with the Lynx I console for a retail price of $179.95. By April of 1991, the same Lynx I console/California Games package had been augmented with a mail-in certificate for the free purchase of an additional cartridge, and lowered in price to $149.95. California Games was later sold separately in its own carton at an unknown retail price.
Cartridge: 128kb stereo cartridge available in three styles (flat, ridged, and curved lip)
Genre: Action/sports title for one player on the console, or for two-to-four players using the ComLynx cable
Screen/playfield orientation: landscape (horizontal)
Other ports of California Games: Amstrad CPC (1987), Apple II (1987), Commodore 64 (1987), MSX (1987), ZX Spectrum (1987), Apple IIgs (1988), Atari VCS (2600; 1988), Commodore Amiga (1988), DOS (1988), Atari ST (1989), Nintendo Entertainment System (1989), Sega Master System (1989), Sega Genesis (1991), J2ME (2005), and Nintendo Wii (2008)
Sequel to: Summer Games (including Summer Games II, The Games: Summer Edition [a.k.a. Summer Games 3]), and Winter Games (including The Games: Winter Edition)
Sequels: California Games II for DOS (1990), the Atari ST (1992), the Commodore Amiga (1992), and the Sega Master System (1993); California Games X for the J2ME (2008); and California Pro Golf for the Commodore 64 and DOS (both 1989)
Carton:  As a free pack-in, the cartridge (and manual) originally were housed in a plastic bag within the Lynx I console box. Later, the cartridge was sold separately in a standard-tab regular-size carton (5 3/8" by 4 3/8" by 7/8") in full color. A larger version of the carton was sold overseas in the European and Asian markets.
Manual: Stapled 20-page manual (including front and back covers) in monochrome. As a free pack-in for the Lynx I console, the manual was a large-size booklet (6 5/8″ by 4 3/4″). Later on, the same manual was folded in half and included in the carton when the game was sold separately in the regular-size carton. For the international markets, a regular-size booklet manual (4 7/8″ by 3 3/4″) was included with the cartridge.
Languages: English only for the large-size booklet manual in the US; English, French, German, Spanish, and Portuguese for the regular-size booklet manual sold internationally.

The Atari Lynx HandyCast is Now Part of The Throwback Network
Thanks to the hosts of The Throwback Review Podcast, (Sean Johnson, also of The Average Runner Podcast, and Rob "Flack" O'Hara, also of the You Don't Know Flack Podcast), The Atari Lynx HandyCast has been added to The Throwback Network. Many retro-themed podcasts are included on the network (both gaming- and non-gaming-related). I myself subscribe and listen to most of them, and I would highly recommend that you check out all of the great podcasts listed there. You can find the network here. 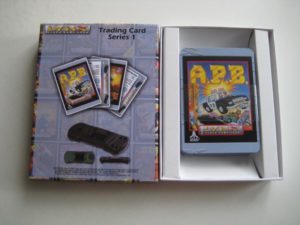 New Atari Lynx Trading Cards (Series 1) Now Available
Marc Oberhaüser on Atari Age is selling copies of his new trading card set for the Atari Lynx. He has already created trading card sets for the Atari 5200, the Atari 7800, and the Mattel Intellivision. The cards look fantastic, and I’ve already ordered the first set, which includes 55 cards: one each for 50 of the first games released by Atari, with the remaining five cards covering the console itself, game rarity scores, and additional information. Cost of the first set is €37.50 (roughly US$44.47), which includes shipping worldwide, and the set has already begun shipping out to those with pre-orders. You can read the Atari Age forum thread about the card set by clicking here. If you’re interested in owning this must-have accessory for Atari Lynx collectors, you can PM Marc Oberhaüser on the Atari Age Lynx forums, and he’ll get you on the purchase list. 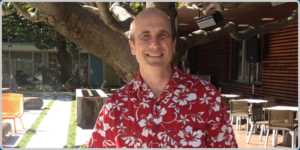 Interview with Chuck Sommerville
Many thanks to Bill Kendrick, curator of the Atari Party in Davis, CA every year, and Shinto of The Atari Jaguar Game by Game Podcast, both of whom alerted me to a recent Retro Hour podcast interview with Chuck Sommerville, creator of the original California Games, as well as the Lynx game Chip’s Challenge, and with whom I share a birthday (I think I’m a little bit older). He also served as a consultant for the Lynx port of California Games. It’s a very interesting interview with one of the greats in the retro gaming industry, and I highly recommend you all check it out; I have a link for the interview here. And you can be sure that I'll be exploring Chuck's biography and career more in-depth in EPISODE 09: Chip's Challenge, coming up in June.

ACKNOWLEDGMENTS
Thanks go to everyone who contributed feedback about California Games for this episode; it is greatly appreciated!

Also, I would like to thank the Free Music Archive for the following musical artists and songs that were used in this episode under the Creative Commons License: "8-Bit Core" by Tagirijus (opening and closing theme music), “Coast Highway” by A.A. Aalto, “Untitled” by Jesse Spillane, “Breaking Waves” by Psychadelik Pedestrian, “Oh Ford!” by The Cow Goes Moo, and “Golden Sunrise (Instrumental Version)” by Josh Woodward.

I would especially like to thank Shinto for submitting his memories of various Atari Lynx games he's owned in the past to The Atari Lynx HandyCast...they are greatly appreciated. And you should all check out Shinto's wonderful Atari Jaguar Game by Game Podcast; it's definitely worth listening to, even if you don't own or have never even seen a Jaguar console. You can find it here.

Finally, my thanks to Ferg of The Atari 2600 Game by Game Podcast. His inspiration and dedication to covering every game cartridge ever made for the Atari 2600 (I think over 1000 of them!) is what gave me the courage to begin this podcast. Please, check out his don't-miss podcast, even if you're not an Atari 2600 collector; or at least visit his website here.

I hope you enjoy this episode of The Atari Lynx HandyCast.
-Mark