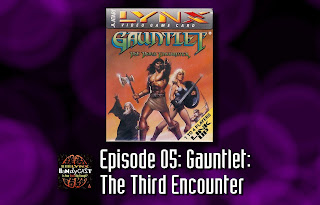 #PA2024, Published by Atari Corp.
In this episode, I cover Gauntlet: The Third Encounter, which was released in 1990. Included in the episode is a complete rundown of the gameplay, music, and sound effects. I also highlight reviews of the game, and some of my loyal listeners have kindly provided their feedback on Gauntlet, so I share it as well. Plus, I also provide information about the prices that collectors can expect to pay for an Atari Lynx Gauntlet cartridge on eBay. 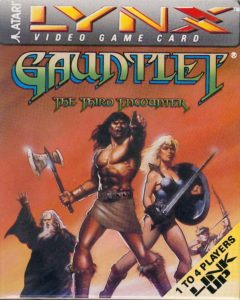 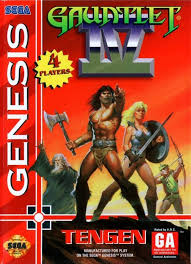 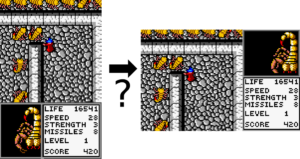 The portrait (vertical) orientation of the screen/playfield in Gauntlet: The Third Encounter for the Lynx was questioned by game players and critics, both at the time of release and in the time since then. Shinto of The Atari Jaguar Game by Game Podcast came up with a mockup of what a normal landscape (horizontal) orientation would look like for the game, had it been designed that way instead. Both the Action window and the Statistics/Radar/Inventory window remain the same size regardless of the orientation, but each window is repositioned. Do you think it would have made a difference in gameplay, or in the ultimate success of the game?

Screen/playfield orientation: portrait (vertical)
Other ports: This game was never ported to any other systems
Inspired by: Various Gauntlet arcade games released between 1985 and 1988; even though this game is usually included in the Gauntlet franchise that appeared in game consoles and home computers of the day (1985-2005), its inclusion in the franchise was a marketing ploy to capitalize on the Gauntlet name, and as such it is not considered an essential part of the Gauntlet canon
Legacy: Gauntlet III: The Final Quest (pseudo-sequel), released in 1991 for the Atari ST, the Commodore 64, the ZX Spectrum, and the Amstrad CPC.
Carton:  standard-tab regular-size carton (5 3/8" by 4 3/8" by 7/8") in full color; cover art was used for 1993 game Gauntlet IV for the Sega Genesis
Manual: stapled 28-page regular-size booklet (4 7/8" by 3 3/4") in monochrome
Languages: English only

LYNXED IN
How to Win a McWill-modded Lynx I Console:
Rules and details about how to enter the Retro Man Cave Giveaway Competition can be found here. First Prize is a working Lynx I console, recapped and upgraded with the McWill LCD screen!

New Homebrew Title for the Atari Lynx: Wyvern Tales
A developer in Amsterdam named Ninjabba on the Atari Age Lynx Forums is getting ready to release his new Atari Lynx JRPG title, Wyvern Tales. Those who responded to his announcement a year ago on Atari Age to reserve a copy (or who subscribed on his website) have already been notified by email that the first batch of games have already been manufactured and are in stock and ready for purchase (full disclosure: I was one of the subscribers). Ninjabba goes further in saying that as soon as the website for Wyvern Tales is updated to accept reservations/purchases, anyone who is interested can log on and do so, depending of course upon availability. The final Wyvern Tales package contains an original looking Lynx box, game manual, and a curved lip style game cartridge (see photo above), and retails for £45 (or US$56) shipped. The developer has been posting updates on the Atari Age Lynx Forums, so check there for the latest information. 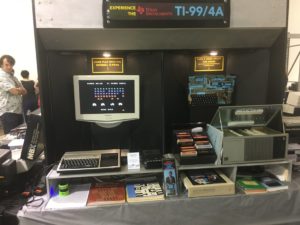 Displaying My TI-99/4a Collection (and My Atari Lynx Collection) at Vintage Computer Festival 6.0 in Roswell, GA on April 21 and 22
In just a few days, I will be hosting a display booth at the Vintage Computer Festival SouthEast 6.0 at the new Computer Museum of America in Roswell, GA. Along with my large “Experience the TI-99/4a” display, I will also have “A Look at the Lynx,” a smaller display showcasing the Atari Lynx and its library of games. I’ll have two working Atari Lynx II consoles from 1991, one of which sporting the McWill LCD screen upgrade, and both consoles will be available for hands-on gaming. Additionally, I’ll have my collection of over 45 games, all with original manual booklets or posters and most in original cartons, along with various cases and other add-on accessories. Take-one handouts outlining the brief history of the Atari Lynx and its legacy are also available. So if you’re in the Atlanta area that weekend, be sure to stop by my booth and say “hi.” But bring lots of AA batteries if you want to play with the Lynx…just kidding; I will provide the power. 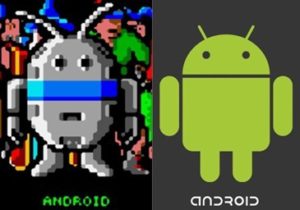 Diary of an Atari Lynx Developer article about the similarities between the robot logo for Google's Android iOS and the Android character in Gauntlet: The Third Encounter (2010)

ACKNOWLEDGMENTS
I would like to thank the Free Music Archive for the following musical artists and songs that were used in this episode under the Creative Commons License: "8-Bit Core" by Tagirijus (opening and closing theme music), "No Control" by Jahzzar, "Drifting" by Midival Punditz, "Gracias" by Hicham Chahidi, "E-Musik" by Phillip Gross, and "waiting for it to happen" by Simon Mathewson.

I would also like to thank Montague Habersham, or Monty as I know him. He is my podcasting assistant for The Handycast, and he also serves as King of the Under-Appreciated Artificial Podcasting Assistants Union, or the palindromically named  UAPAU. And he graciously agreed to appear with the old man from Scene 24 in the opening vignette of this episode. Thanks, Monty.

I would especially like to thank Shinto for submitting his memories of various Atari Lynx games he's owned in the past to The Atari Lynx HandyCast...they are greatly appreciated. And you should all check out Shinto's wonderful Atari Jaguar Game by Game Podcast; it's definitely worth listening to, even if you don't own or have never even seen a Jaguar console. You can find it here.

Finally, my thanks to Ferg of The Atari 2600 Game by Game Podcast. His inspiration and dedication to covering every game cartridge ever made for the Atari 2600 (I think over 1000 of them!) is what gave me the courage to begin this podcast. Please, check out his don't-miss podcast, even if you're not an Atari 2600 collector; or at least visit his website here.

I hope you enjoy this episode of The Atari Lynx HandyCast.