Jump to content
It took me a little over a week, but I've poured through the 50+ offerings from Free Comic Book Day (FCBD) 2018, and these, in no particular order, are the top 10 titles that have my interest piqued for the coming year:

Barrier (Image)
I assume the entire series will be printed in the landscape format and I am totally ok with that (as long as I don't have to keep turning the book).  This is a captivating story with a dual perspective across the Mexico/United States border.  The Mexico story is told entirely in Spanish (appropriately) and the American side is told in English.  This will be an excellent opportunity to improve my multi-linguistic abilities!  Events are hurtling toward one another from both sides when an entirely unexpected third party suddenly intervenes.  I'm very excited to see where it goes next!

ShadowMan (Valiant)
Coming off of my enjoyment of the epic X-O Manowar, Valiant has once again stirred up my interest with ShadowMan, another long-lived property I know nothing about.  I'm already in love with the New Orleans setting and all of the voodoo mysticism, so I am excited to find out more about who ShadowMan is and what's going on in the bayou!

The Mall (Scout Comics)
This one was a real shocker.  I was totally ready to toss it into the "nope" pile based on the cover and concept alone.  But then it hooked me with a totally relatable main character and all the 80's Miami mob intrigue you could want.  The main character evokes a young Peter Parker, only his superpowers are video games and sheer chutzpah.  He's left in a world of trouble at the end of this preview issue and I really need to know what happens next! 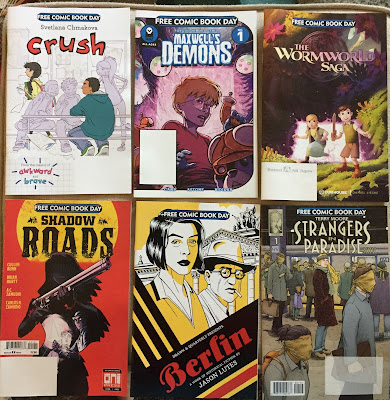 Die Kitty Die (Astro Comics)
Apparently Die Kitty Die is a thing and I have totally missed it.  But the thing it appears to be is an irreverent, self aware, ironic riff on Archie style comics.  It's poppy, it's goofy, and it looks like a lot of fun.  I need more comics like this in my rotation.

Shadow Roads (Oni Press)
Oni Press has always felt like the "you're not cool enough to read these edgy comics" publisher, so I've not really given them a fair look.  But Shadow Roads is scratching a Western comics itch that I caught back when Marvel did (and then promptly abandoned) Red Wolf a few years ago.  To be sure, there are some supernatural elements at the core of the story, but I really like the diversity of the characters and the way the story is being told.  Let's hope I'm cool enough to keep reading it...

Berlin (Drawn & Quarterly)
At first I thought this was an incredible mini-series about to launch, then I did some research and it appears this comic is actually very old news.  Berlin is a highly acclaimed graphic novel set in Germany in 1928.  It's told from two disparate perspectives and appears to provide a street level view of Berlin in the time between wars.  My wife has a degree in History and we always talk about these sorts of things so I expect this to be a great topic of conversation for us.  It's being recollected in hardcover which is why it's here in the FBCD pile.

Strangers In Paradise XXV (Abstract Studio)
Terry Moore won me over with Motor Girl, and SiP is hailed as his great masterwork.  Now he's dipping back into that world and I'm very curious about it.  This preview issue felt like I needed to already be familiar with the characters and their world, so I feel a bit lost, but I'm going to try to pick up some trades and read the old stuff along with the new. 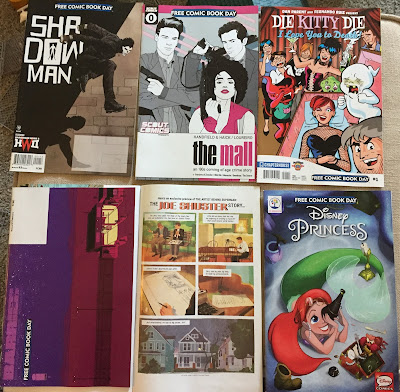 Maxwell's Demons (Vault)
Child protagonists seem to be hitting a chord with me lately and Maxwell is no exception.  Maxwell seems to escape his miserable home life by traveling to other dimensions and having amazing adventures with a proper father figure.  But, much like with reality, that father figure also turns on him and that's when reality and hyper reality collide.  This looks like it's going to be equal parts dark and fun.

Crush (Yen Press)
Jorge is a pretty chill dude.  He puts an end to static whenever it pops up and he's always a great guy to have as a friend.  But when the artsy and awkward Jazmine comes onto the scene, Jorge is at a total loss.  She's kryptonite in girl form.  How will Jorge deal with this completely alien experience?  This might sound super mundane, but the characters are instantly likable and the story is one we can all relate to.  I expect to thoroughly enjoy Crush.

The Joe Shuster Story (Papercutz)
In the back of the Papercutz FCBD feature, there was a short preview of The Joe Shuster Story, the biography of the artist who created Superman.  While there were only a couple of pages of story, I was instantly enthralled by the simplicity of the storytelling and the quaintness of the art.  I love tales of comics early days, so I am definitely going to check this out when it lands.

The Wormworld Saga (CubHouse)
Theo's dad paints pictures that become portals to other worlds (think Narnia).  Theo shares his dad's secret and often travels with him to these exotic places.  Ever the awkward boy, Theo decides to share this secret to impress his friend Laura in an attempt to avoid losing her to rival Tom.  Upon coming back from a harrowing adventure, an alien bug from that other world sneaks into our world just as Theo and Laura escape certain peril.  That's probably not good.  This series looks and feels a lot like the super disappointing Finding Gossamyr from several years back, so I am interested, but cautiously so.  I don't like getting wrapped up in a beautifully illustrated and magically captivating world only to have the story never be finished.  So I'll keep my eye on this one, but may not jump through the painting just yet...

Disney Princess (Joe Books)
I've seen these on the shelves and passed on them because they are with the "kids" comics, but I was surprised to find how much fun this comic is.  Not a full length story, but instead a collection of comic strip shorts, this has the same quick-hit fun appeal as the Ducktales comic I already get.  While I might not get every issue, if I see one featuring a character I really like, I will probably pick it up.


Another great FCBD in the can and some really exciting stuff coming out this year.  Of course, as I read it, I'll share my thoughts any maybe point you toward some great things you should be reading as well!


View the full article on The Electric Frankfurter