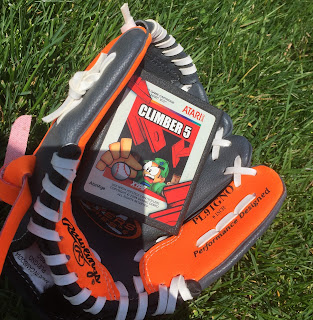 The turn of the century truly was the Golden Age of 2600 Homebrewing.  All of the big names were active and working to break all the conceptions of what could be done on the VCS.  This was the era of Thomas Jentzsch, Andrew Davie, Manuel Rotschkar, Peiro Cavina, Paul Slocum, and Dennis Debro.  Those other guys, I have no doubt you’ve heard of.  The list of incredible games they developed is a who’s-who of amazing homebrews from that era.  Debro, on the other hand, might have snuck past you.  The only game he released, that I am aware of, in cartridge form is Climber 5.  However, there is something to be said for doing something once, nailing it, and then moving on to other projects.  And, while a few of those heavy hitters above are still producing mind blowing games for all to enjoy, most of them, including Dennis Debro, aren’t seen much around the community anymore.  And if you play Climber 5, you’ll lament that fact like the rest of us do.

What’s All This Then

In Climber 5, tragedy has struck.  During an otherwise typical baseball game, an overly zealous homerun ball left the park and came to rest atop a suspiciously nearby construction project.  Sadly, for this particular youth baseball program it seems they could only afford the one ball.  Therefore, unless the ball is retrieved, the game will be over.  What’s the logical course of action?  Send the ball boy after it of course!  What could possibly go wrong?  Clearly no grounds for any kind of serious litigation could stem from that decision, right? 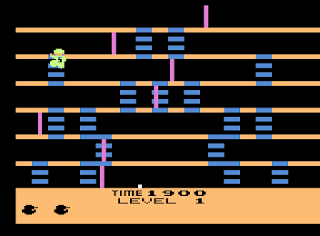 That’s where you come in!  Cast in the role of the put-upon ball boy, it is your job to scale the construction site and retrieve the ball.  As if climbing up an in-process building wasn’t chancy enough, this building features moving girders (stood up vertically through some voodoo) and falling objects like hammers and lunchboxes!  Avoid the hazards, make it to the top and the ball is yours.  Take too much time and the ball might roll or fall to another part of the building.  Once you snag the wayward dinger, you’ll find yourself at the bottom of the building with a new ball at the top and faster moving girders.   Looks like it’s going to be a long day!

Beautifully.  Dennis Debro is a master at tight programming.  Climber 5 is finely tuned and plays very smoothly.  Collision detection is sharp, character movement is fluid and obstacle movement is consistent and challenging.  Best of all Climber 5 feels like a game that could have come out in 1980, so it's right at home on the VCS.  As with the best video games out there, the gameplay is simple:  scale the building, avoid the obstacles, collect power-ups and reach the goal.  It’s a formula that is tried and true and when executed properly, as with this game, it’s sheer magnificence.  Climber 5 also features 3 game variations to provide different challenges.  The “Original” variation is basically a direct port of the Atari 8-bit game that inspired this version.  Ladders are static and the girders move in one direction.  The “Normal” variation introduces variable ladder placement and random girder movement.  You also get a timer and the ball moves if not retrieved quickly enough.  The “Advanced” variation adds in dropping items; some award bonus points, others cost you a life.  For my money, the “Advanced” game is where it is at.  “Original” is great if you really want a challenge.  It’s way harder than you think it is going to be.  But the VCS version of Climber 5 surpasses it’s 8-bit predecessor with all of the new features in the “Advanced” game. 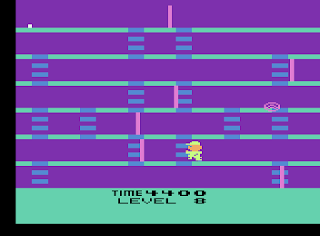 Climber 5 is extremely well balanced.  The base goal of getting the baseball at the top of the structure is simple, but the challenge of getting past the girders, using your ability to change their movement, catch falling bonus items while avoiding deadly ones keeps this game from being another other than just a "simple game.”  Player and girder speed also change to keep you on your toes.  The time limits and ball relocation help keep bonus point farming at bay and using your power to change the girder movement costs you points, so you can’t just cheese your way to the top.
If there is one downfall to Climber 5, it’s that once you achieve a certain level, the movement of the girders, the ladder placements, and the falling objects are no longer random.  They fall into what amounts to about 6 distinct patterns and when you learn those patterns you can play the game forever (or until you roll the score).  I discovered this years ago when I first got the game and was playing it for hours on end.  My wife and I even charted the patterns, named them, and tested them repeatedly.  I have kept quiet about them for a decade because I was afraid releasing them would be a game breaker for other players and I have always felt that discovery of the patterns is part of the fun in playing.  That said, I will tell you that the key to identifying the patterns starts with paying attention to what items drop and when.  The other key is to never die.  If you die, the patterns get jumbled a bit and it takes a while to settle back into them.  But if you learn the patterns and successfully execute them, you can play the game somewhat effortlessly forever.  I have discovered, however, that in my recent replaying of the game for this review, getting back into those patterns isn’t automatic, so there is still plenty of fun to be had with this game, even if you suss out the patterns.  You can also go and try that crap on the “Original” variation and get your head smashed in.

Climber 5 is from the era before innovations like AtariVox and SaveKey so it doesn’t have some of those fancier goo-gaws, but it does have some other niceties for your appreciation.  In addition to the aforementioned gameplay variations, Climber 5 features a beautifully designed Atari Silver Era instruction manual with a full color mini-comic in the back.  It also features a really nice title/options screen that is likely the precursor to many of the title screens you see on more recent homebrews.  Finally, Climber 5 pulls off all of its graphical beauty without any flicker.  For those in the know, that's something to be proud of.  Again, Dennis Debro knows how to fine tune a game. 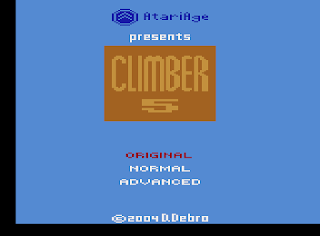 If you like classic style arcade games, then you are going to love Climber 5.  The gameplay is pick-up-and-play simple, well balanced and engaging, and there is plenty of “just one more” replay appeal.  The three game variations provide unique play opportunities and challenge for even expert gamers.  Solid graphics and sprite work make the game bold and impressive to look at.  As I said in my store review of 14 years ago, Climber 5 is a must have for any Atari homebrew collection.  I still love it as much today as I did the day I first got it! 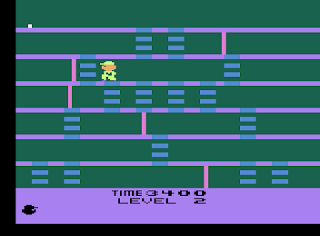 (these tips are all for the “Advanced” variation, you're on your own for the "Original" variation)
Be a Switch Hitter!: Don’t be afraid to use the switch power to move those girders around.  Sure it costs points, but once you are in the flow, the small amounts of points you spend to get to the ball will pale in comparison to the points you get for completing the level.
Don’t Push It:  Just because I told you to use the switch power liberally doesn’t mean you can abuse it, particularly when a girder is flashing, indicating it is about to change direction.  Girders tend to get stubborn around this time and you will drain all of your points only to have it push right back into your face. Best to use your switch when the girder is not in a changing zone.
Ladders of Opportunity: I find I have the most success taking the first available ladder whenever possible.  This doesn’t always work, nor is it always applicable, but if you use it as a general guideline, you’ll get to the top faster.
Watch Your Head!:  When you are on the top two floors, move briskly and don’t dally.  Get to that baseball as fast as you can.  There will be absolutely no warning for a new falling item and if you are unlucky that item will be hammer.
So there you have it!  Climber 5, a more classic Atari 2600 homebrew there isn’t!  Great arcade action, tons of replayability, and enough challenge to keep you climbing to new heights! 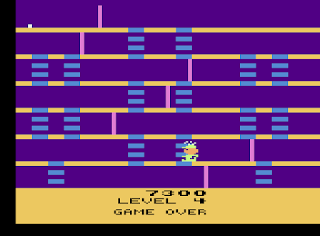