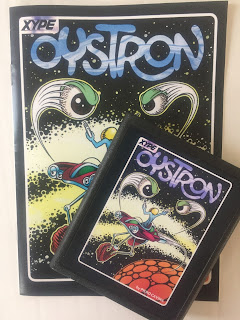 Let’s go back, way back to the dawn age of modern Homebrewing.  A time when sitting down and punching out code for a new Atari 2600 video game was more than just a labor of love, it was an act of self-sacrifice and skill.  These were the days of the Stellalist: a small, cloistered corner of the internet where those few who possessed the knowledge and talent for writing in a coding language more obsolete than Latin is to human languages swapped secrets and mined the VCS library for whatever wisdom could be gleamed from it’s hallowed halls.  At this time you could count the number of homebrew games without taking off your shoes.  Games like Edtris and Dark Mage were dipping their toes in the water to see if it was deep enough to swim.  From that primordial homebrew soup would soon come incredible games, games like Qb and this month’s selection:  Oystron.  I had not yet entered the classic gaming scene when Oystron began forming, but it, and I, burst onto the scene at about the same time.  I remember hearing about it, and others like it, but had no real clue what homebrews really were, or if they were anything to pay attention to.  No, I was too busy trying to track down copies of H.E.R.O and Pitfall II; desperately chasing those nostalgic nuggets of my past unable to see the future of VCS gaming jogging along side me.  So now, nearly twenty years later, I aim to catch up!  I’m probably the last person on earth to play Oystron for the first time, but maybe not.  Maybe you too are saying, “Hey! I just got here!  You mean there were homebrews before Draconian?”  There sure were.

Oystron is a space shooter with some interesting twists.  You are in space harvesting pearls from space oysters.  As you harvest them you drop them in the collection zone.  When you have collected a full row of pearls they become powerful bombs and clear room for more harvesting.  This would likely be a tedious job excepting that you are not alone.  Space seems to be occupied by a bevy of creatures like yourself, that find these space pearls enthralling.  As such, these other space creatures will do whatever they can to steal your pearls.  So while you are busy harvesting you must also fight off your rival creatures to keep them from stealing or outright destroying your crop.  If you can hang around long enough, you will enter the Oystron phase.  It is during this phase that space goes absolutely mad as the mysterious Oystron appears.  Oddly enough the Oystron isn’t really hostile, he just seems to dance around a bunch during which time you can blow him up with bombs or you can just wait until he gets tired and mutates into a space oyster.  Yeah, maybe the most bizarre boss fight I’ve ever seen.  Either way, after the Oystron has done whatever it is it has set out to do, you’ll enter the Warp phase, during which everything speeds up dramatically and the risk of death is greatly increased.  Survive the Warp phase and new level will begin.  Repeat until dead or 100K points, which ever comes first.  Spoiler alert: it’s most likely death. 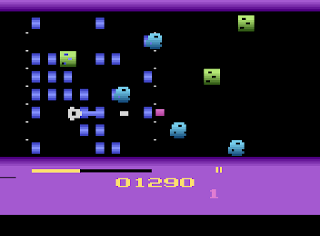 Pretty damn solid for a game from the Homebrew Stone Age.  Ship movement is smooth (mostly, more later) and collision detection is solid.  The game starts out pretty difficult, but once you get the hang of the action things settle down and you can really get into the gameplay.  Difficulty definitely ramps as the levels progress and you’ll find particular challenge during the Warp phases when the speed goes completely out of control.
However, it’s not all good news.  While the main part of the level is great and the action is well executed, once you enter the Oystron phase, the wheels start to come of.  Perhaps in an attempt to ratchet up the excitement and create a sense of disorientation, during the Oystron phase the screen begins to flash with a level of seizure inducing flash that only the most rigid mind can possibly tolerate.  Everything is blinking or flashing or moving or all three at the same time.  If the effect is to throw you off your game, it succeeds beyond what is reasonable.  Sadly it is so distracting and so busy that it totally breaks your concentration and makes this part of the game extremely difficult to play and enjoy if you can keep from writhing on the floor.  Somewhere during all of that screen vomit, the Oystron makes his appearance and you have an absurdly short amount of time to regain your senses, find him, and plant your bombs without being hit by the rest of the crap flying around.  It’s a mess, and not in a good way.
Things calm down a little bit once you enter the Warp phase, and you’ll only have to deal with a change in screen color and a dramatic shift in enemy speed.  Gameplay remains the same as in the normal level, things are just much, much faster.  I found, that I was still suffering from the effects of the Oystron phase and generally spent the Warp phase bleeding lives and crashing into stuff hoping the madness would stop. 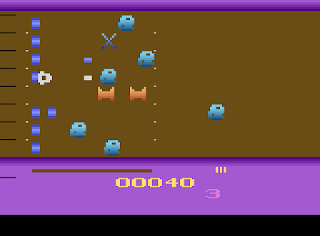 If you have any lives left, you get to start level 2.
So overall, 80% of the game is really fun space shooting action, and the other 20% runs the risk of causing vertigo.  The 80% that is fun is really great and that’s what I keep coming back for.  I find that I just grit my teeth and do my best to survive the other 20%.
There are a couple of game variations to keep you interested and challenged if the base game is too easy.  There are novice, medium, and hard options as well as an option to make your spacecraft “bounce” when it gets near the edge of the screen instead of just stopping.  It’s the best I can do to play the novice difficulty level, but I am willing to bet expert players enjoy the challenge of the other two.  I found the “bounce” option for the ship movement to be more annoying than anything else and honestly made the game feel sloppy and broken rather than more challenging.  Keep those difficulty switches on B, kids. 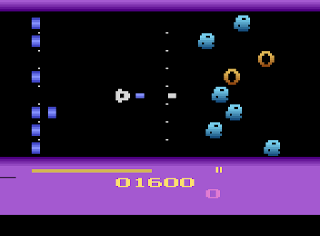 Being from the early days of homebrewing, Oystron is its own Whistle and Bell.  The fact that it existed was super special for its day.  This is long before AtariVox or SaveKey were anything other than “wouldn’t it be cools.”  Oystron does come with a nicely designed full color manual, however the manual is riddled with typos and mislabeled images.  For instance, the space oysters and space creatures are mislabeled, and the manual says Difficulty setting B will cause your ship to bounce, when it is in fact the A setting that causes this.  There are some other inaccuracies in the manual that might simply smack of coming from a time when video game manuals weren’t being written or scrutinized as much as they are today.  There are also some things the manual leaves out, like how you must line up pearls to obtain the bombs with which to defeat the Oystron, or that lining up pearls causes them to disappear.  After 20 years I think the manual is due a rewrite.

Oystron is a fun and engaging space shooter for the Atari 2600.  It features a novel concept with intriguing and challenging gameplay.  It takes a few minutes to fully comprehend what is going on, but once you get the hang of collecting pearls and fending off the bad guys, you’ll be having fun in no time.  Just be forewarned about the completely disorienting and psychologically jarring Oystron phase.  If you are even slightly set off by flashing lights, you may want to give this game a pass.  What happens during the Oystron phase is very similar to what happens to Alex in A Clockwork Orange.  But if you can make it through that with your wits intact there is much to enjoy about Oystron.  Don’t be wary just because it’s one of the earliest homebrews out there! 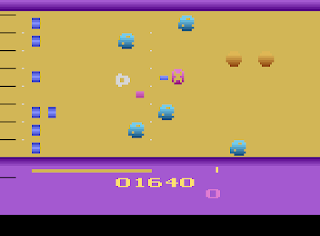 Rapid Fire:  You can rapid fire by holding down the fire button.  This is nice not only because you keep shooting, but because you automatically drop off any pearls you pick up.  Early on you don’t have enough to worry about placement, so just grab and drop.  Later in the level once the collection area gets fuller, you can start being more judicious about where you place your oysters.
Play It Safer:  Enemies come from the right and they spawn on screen.  So while you can venture outside the collection zone, there is really little reason to ever do so.  If you keep left you can get a clearer sense of the action and intercept the space creatures before they can steal your horde.
The Best Offense is a Great Defense:  I know you want to get out there and just grab all the pearls you can, but the space creatures need to be your top priority.  Wait until a new wave spawns, locate and destroy the space creatures first, then harvest as many oysters as you can before the next wave starts.
Space Zoology 101:  Know your space creatures.  Some just come and take pearls, others will obliterate them.  Some cannot be killed and some can only be killed from behind.  Some space oysters have harder shells than others.  All of this goes to show that you will be best served learning the special characteristics of each kind of space creature, so that you better understand how to survive their onslaught.  This isn’t just a shoot ‘em up.
Oystron Phase:  I don’t know what to tell you.  As soon as your screen goes completely berserk, try to regain your composure and look for the Oystron.  He usually dances about mid-screen and bounces between rows.  Set bombs in the rows he’s dancing in and just get out of the way.  Do your best not to die, because if you do, you’ll have to do the Oystron phase again.
Warp Phase:  This phase is just wicked fast.  It doesn’t last forever, so my best strategy is to stay in one row and shoot until it’s over.  If you are brave enough to stick your nose out and try to harvest pearls, that’s all you. 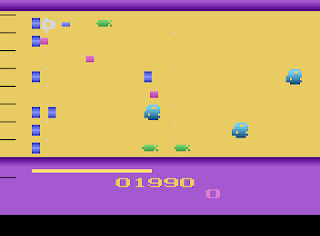 So there you have it!  One of the, ahem, pearls of the early Atari 2600 Homebrew library dusted off and shined up, ready for action again.  It’s nice when an older game like this can hold up against some of the extremely impressive games that are coming out today.  Oystron’s not going to blow anybody’s socks off these days, but it is still fun to play and still provides plenty of good solid action and challenge.  If, like me, you’ve been passing over it for a while, it might be time to go back and see what you’ve been missing.