Jump to content
Recently, in the Atariage High Score Club, we played a game called Red Sea Crossing.  This game is one of the rarest, most hotly debated games in recent Atari history, however when it was created it did not have a manual.  What follows is my effort to correct that 34 year old mistake.  The unofficial manual created below was created by me with some very helpful contributions from community insiders like Rom Hunter who runs the wonderful resource Atarimania.com, and fellow gamer who goes by Leto on the Atariage Forums, so big thanks to both of those cats for helping me get this right.  Also a nod to forumite Omegamatrix who did some peeking around the code for me.

Red Sea Crossing  (Unofficial Manual)
Inspirational Video Concepts
Programmed by Steve Schustack
“Then Moses stretched out his hand over the sea, and all that night the Lord drove the sea back with a strong east wind and turned it into dry land.  The waters were divided, and the Israelites went through the sea on dry ground with a wall of water on their left and on their right.”  Exodus 14:21-22 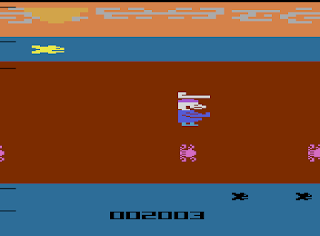 What the Lord apparently failed to tell Moses was that his trip across the Red Sea bed was going to be fraught with perilous sea monsters and other obstacles.  That’s where you come in!  Relive the untold story of Moses crossing the Red Sea by guiding the Israelite leader as he leaps over chomping sea monsters, ducks spears, and dodges slithering serpents.  Along the way pick up articles of faith including stone tablets, white doves, and staves to increase your score.  How far can you go? 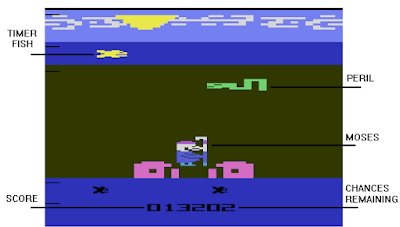 Object of the Game

The object of the game in Red Sea Crossing is to help Moses cross the Red Sea without succumbing to the perils of the deep.  As you move Moses across the screen, he will encounter a variety of hazards intent on preventing him from progressing.  To overcome these obstacles you must time your moves precisely to avoid contacting them.  Sometimes this means evading the obstacles’ movement patterns, sometimes this means jumping over an approaching obstacle, and in later levels, success will require both techniques at once. “I can do all this through him who gives me strength.” (Philippians 4:13)
Three Chances
When you start the game, Moses will have 3 chances to get as far across the Red Sea as he possibly can.  Certain dangers along the way can cause Moses to lose one of his chances.  There is a certain item Moses can find to gain extra chances.  There may be other ways to gain extra chances so keep your eyes open!  The total number of chances Moses has remaining is indicated by the last 2 digits in the score counter at the bottom of the screen (see figure 1).  When the indicator says “1,” Moses is on his last chance.  Contact with a deadly danger will result in the end of the game.  Press the RESET button to start again from the beginning of the game.
Time Limit
You have a limited amount of time to cross each screen.  When a new screen starts, the fish at the top of the screen (swimming in the wall of water on Moses’ left) will start swimming toward the right side of the screen.  If it reaches the right side of the screen, Moses has taken too long to progress and will lose 1 chance.  The fish will turn red when you have approximately 10 seconds left to advance to the next screen.

Perils
As he crosses the dried sea bed, Moses will encounter many dangers that threaten his progress.  Some of these dangers will merely slow Moses down or cost him points, while many of them will cause him to lose 1 chance.  The following are the dangers Moses will face:

Seaweed:  Moses must avoid getting tangled up in the seaweed that is strewn across the sea floor.  If he touches it, it will cost him 1 point for every second he touches it, and it will also slow his progress.  Other creatures on the screen will freeze in place until he is free.

Swarms:  Swarms of stinging locusts are buzzing about and Moses must not touch them.  Contact with a swarm will cost him 1 point for every second he touches it and his progress will be slowed.  Other creatures on the screen will freeze in place until the swarm has been evaded. “Never before had there been such a plague of locusts, nor will there ever be again.” (Exodus 10:14)

Sea Monsters:  Giant leviathans will poke their massive heads from out of the right wall of water attempting to snare Moses in their gaping maws.  Moses must jump over these beasts or step carefully to avoid getting caught.  Contact with a sea monster will cost Moses 1 chance.

Spears:  Moses must not forget that Pharaoh’s soldiers are hot on his heels.  These soldiers will lob heavy spears over Moses’ head.  Stay low to avoid them as touching them will cost Moses 1 chance.

Pharaoh’s Archers:  Some of Pharaoh’s soldiers are armed with mighty bows with which they will lob a relentless volley of arrows at Moses.  Their aim is deadly accurate, so Moses will need to leap up to avoid their razor tips.  If Moses is struck with an arrow he will lose 1 chance.

Serpents:  Some of the most dangerous creatures Moses will encounter, serpents move about the screen in various ways.  Watch them carefully and determine the best way to avoid their deadly touch.  Contact with a serpent will cost Moses 1 chance.  “Now the serpent was more crafty than any of the wild animals the Lord God had made.” (Genesis 3:1)

Giant Clams:  When the Lord pulled the waters apart, giant clams were left resting on the sea floor.  These clams will block Moses’ path unless he can figure out a way to safely leap over them.

Octopi:  These little pink beasts may seem cute, but touching one will cause Moses to lose 1 chance.  Learn their movement patterns and move smartly to avoid them.
Articles of Faith
Though passage through the Red Sea bed is treacherous, it is not without signs that Moses has been favored by the Lord.  As Moses progresses through the various screens he will find tokens of faith that bolster him on his journey.

White Doves:  These harbingers of peace can be found darting about quite often in the air between the walls of water.  If Moses catches one he will be awarded 10 points. “‘I saw the Spirit come down from heaven as a dove and remain on him.’” (John 1:32)

Stone Tablets:  Perhaps as a portent of the things to come, large stone tablets can occasionally be found floating in the air above the sea floor.  If Moses can collect them he will gain 10 points.

Staff of Moses:  The most valuable of all of the articles is the Staff of Moses.  Should Moses find it, he will be awarded 10 points plus 1 extra chance.  These are extremely valuable, so be sure not to miss them!  “Even though I walk through the darkest valley, I will fear no evil, for you are with me; your rod and your staff, they comfort me.” (Psalm 23:4)

As Moses progresses through the Red Sea floor he will earn points for every screen he successfully completes.  Points per screen will vary based on the obstacles Moses faces in each.  Moses will also earn points for collecting Articles of Faith.  Likewise, Moses will lose points when he contacts a non-lethal peril like Seaweed or Swarms.  He will lose 1 point per second he is in contact with these perils.

As Moses progresses across the floor of the Red Sea he will encounter a wide variety of different screens.  Some screens will feature only one peril or article of faith, while later screens will feature combinations of game play elements.  Each screen can be successfully completed without losing points or a chance, but you must study each screen carefully to determine the best course of action to reach the other side.  It is sometimes wisest to observe the location and movements of all obstacles before rushing into action. “The end of a matter is better than its beginning, and patience is better than pride.” (Ecclesiastes 7:8) 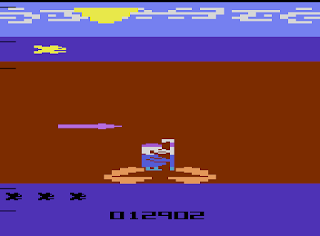 History of the Game

Red Sea Crossing was an independent project by a self-taught programmer named Steve Schustack.  Schustack programmed and released the game in 1983.  The game was only sold directly through mail order via advertisements in religious magazines like Christianity Today.  Schustack confirmed an extremely limited run of a few hundred copies.  It was sold without a manual or box, but did feature an accompanying audio cassette tape featuring the voice talents of country western singer Dale Evans.  The game vanished from all knowledge until a copy was discovered at a rummage sale in Cincinnati, OH in 2007.  The discovery caused quite a stir in the Atari 2600 community and an oft-heated debate raged for several years over the game’s veracity.  The discovery of an aforementioned advertisement for the game found in 2011, confirmed the game’s authenticity, however, it wasn’t until the game was purchased by another collector and the ROM dumped that the community had first hand exposure to the game itself.  As of the time of this manual’s creation there is still only one known copy remaining in existence.  The ROM image is available at atarimania.com along with a picture of the original advertisement in Christianity Today.
Curious fact:  Steve Schustack claims the game has an ending, but no player has been able to confirm that fact.  He also eluded to the possibility of an easter egg in the game.  Happy Hunting!
“Red Sea Crossing” is entirely the property of Inspirational Video Concepts and Steve Schustack.  This manual was created solely for the purpose of recreation and free use by video game enthusiasts.  The creator of this manual will in no way seek profit from the distribution of this manual and makes no claims to the intellectual property described herein.  All Bible quotations are from the NIV.