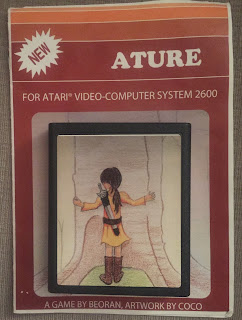 Ature
Developer:  Beoran
Available:  (ROM ONLY) Atariage.com
Pulling from the archive again this month as I await some excellent new games to arrive in the post.  Ature was a game I picked up at an East Coast gaming convention back in the days when that was a thing.  The game had just been released and Beoran, the developer, had granted a few folks the rights to distribute physical copies of the game.  I picked up a boxed copy for around $45 American, I believe.  It was very exciting to pick up a brand new game at a convention (this wasn’t quite as common as it is today).  Ature was even more of a thrill because it was an adventure game at a time when those also weren’t really a thing.  And even seven years later, it still holds up as a solid adventure game for your VCS.

What All This Then? 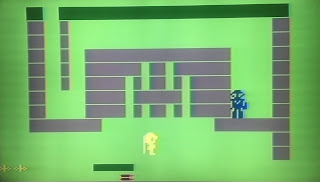 Ature is the story of Signe, a young sword fighter whose family has been tasked with protecting the mystical tree that protects the land.  All was going well until a black ship carrying the evil queen Ikaza landed on Ature’s shores.  Ikaza has threatened to destroy the mystical tree by draining all of its power.  She’s turned everyone except you to stone and has started to use her evil to pervert the land.  You alone must travel far and wide defeating the queen’s minions and solving the dastardly puzzles she has put in place to prevent anyone from overthrowing her rule.  Only by finding the three leaves of the mystic tree can you break the curse and confront Ikaza face-to-face.
Ature is a standard adventure game in the vein of well-loved classics like the Legend of Zelda.  You travel the land using your sword and some limited magical abilities, defeating enemy monsters and seeking out switches and mini-bosses that will open new paths in the world.  Every time you defeat a boss or flip a switch you will be granted access to more of the world, special weapons or powers, and eventually the final showdown with Queen Ikaza.  By defeating enemies you gain experience and increase your combat ability, health bar and magic points.  You can also find helpful items that increase your power.  There is a book that lets you consume MP (called Numen Points in this game) to shoot energy beams from your sword.  There is a shield that protects you from shooting enemies.  And so on.

Really, really well.  The world is a pretty decent size, particularly for this era of homebrew.  There are many distinct areas to explore and wide varieties of enemies to fight.  The game follows pretty standard adventure game rules.  You start out with access to a small part of the world and as you defeat enemies or find switches you are granted access to new areas.  These new areas often include power-ups or weapons you will need to gain access to the next area.  The game isn’t linear, however, and you will want to keep checking back on certain areas to see if something new has been unlocked.  You’ll sometimes be able to see an item locked behind a wall that won’t open until much later in the game.
Signe controls just fine.  You can walk with your sword extended to stave off instant attacks when you enter a new screen.    Collision detection with enemy sprites is pretty generous, except with the Invisible Enemy, who is a real pain in the butt.  Defeated foes drop power-ups to restore health and magic points.  Again, all pretty standard stuff, just not stuff you see much of on the Atari 2600. 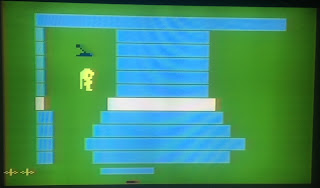 The game isn’t perfect though and it suffers from a few of the idiosyncrasies of its day.  Not all of the mini-bosses respect the boundaries of the play field, so occasionally you’ll be in a room that passes through the boss room, but is not in the boss area, and the boss will march over and crush you.  Typically this can be avoided just by moving quickly, but it’s something that should have been cleaned up in play testing.  Some rooms are nearly impossible to see on a real TV with real hardware because of the coloring choices.  There are two pink rooms in the Ruby Mountains that are really tough for this reason.  The manual doesn’t tell you enough about the icons in your inventory so that you really understand what you’ve picked up (if what you’ve picked up shows up at all.  In the screenshot below I am very late in the game, on my way to Queen Ikaza, but it’s hard to know fully what I have in my inventory.  I have some kind of cross thing, the Numen Shield (that one is obvious), something that looks like a crown, and what looks like bottom half of E.T.’s telephone.  With some careful study of the gameplay, you can eventually figure out that you have the Numen Sword, Numen Armor, and the two Mystic Books, but a simple item legend in the manual would be helpful.
These are minor technical details, but they reveal a lack of polish that would otherwise make this game absolute top tier as far as VCS adventure games go.

Well my copy came with a swanky box and instruction manual, but that was seven years ago and the guy I got it from has kind of disappeared from the community, so chances are good that’s not going to be your experience.  However, because the game is open source and the ROM is available, you can always contact Atariage and have them make you a custom cartridge with whatever swanky label, manual and box you want to create and pay for.  The game does feature nice, big graphics with well drawn and thought out play fields and interesting looking enemies and bosses.
Apart from that Ature is exactly what it is: a great game strong on fun and light on spectacle. 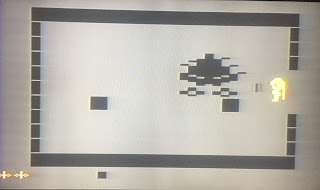 Ature is a great adventure game for the Atari 2600.  It takes about an hour to figure out and beat, especially if you get stuck fighting the Invisible Enemy repeatedly like I do.  There are lots of places and things to explore and tracking down all of the power-ups and abilities is part of the fun.  Once you’ve beaten it, it’s fun to run through it again knowing what you know and seeing how quickly you can save the land of Ature.  After that, you can probably shelve it for a while and then pull it back out once you’ve forgotten every last nook and cranny of the map.  Pretty standard adventure game stuff.  In recent years there have been many more really incredible adventure games for the VCS.  People are finally starting to figure out how to make these kinds of game shine on the Atari, and it’s games like Ature that got us to where we are today.

Home is Where the Heart(s) Is:  Signe’s home will always have health power-ups.  Leave the screen, return, and the heart will reappear.  This is a big help late in the game when you get defeated and respawn at home.  Several trips back and forth between screens can start you off with full health again.
These Bullets are Too Expensive:  I tend not to use the Book of Striking.  It costs a Numen point every time you use it and enemy movements are pretty erratic in this game, so you aren’t always guaranteed a hit.  I prefer to save my Numen points for healing with the Book of Life.  There is only one place where you must use the Book of Striking to hit a switch that is otherwise unreachable.
Get Her, Ray!:  Most of the mini-bosses can be bum rushed and taken out with speed.  There are a few that you will want to strategize for, but don’t be afraid to take the very direct approach.
You Can’t See What You Can’t Hit:  The Invisible Enemy is one of the most annoying and troublesome mini-bosses in the game.  You’ll encounter him late in the game near the Sea Shrine.  The only way you’ll know he’s there is A.) you’ll die almost instantly upon entering the screen. OR B.) before you die you’ll see a small dash moving towards you.  That dash is the only indication of where the Invisible Enemy is.  Don’t mistake it for his shadow, because it doesn’t work like that.  Go into the battle with full health and make a dash for the bottom of the screen.  As the dash approaches, stab at it from the bottom. You’ll know you’ve hit it if the dash jerks in one direction or another. If things get tight, run a circle around the dash until you can get back to a “from the bottom” attack stance.  Stab.  Repeat at least 6 times.  It will take some practice, but this is the ONLY way I have been able to defeat the Invisible Enemy.  He’s a pain.
So there you have it!  A solid adventure game for the Atari 2600 that might have flown under your radar.  It’s not the flashiest game of its kind, but it’s a lot of fun and is a very welcome addition to an underserved category of games on the VCS.  Legend of Zelda fans will feel right at home exploring the world of Ature and vanquishing the evil Queen Ikaza.  If you missed Ature before, at the very least, download the ROM and give it a look. 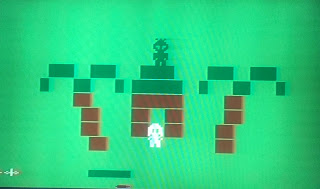