This may seem like a strange topic to start off a blog that focuses on my appreciation for my childhood but it's a subject that I tend to dwell on a lot. The year I foolishly gave away my entire toy collection.

I was born in 1973. My parents divorced when I was six. I stayed with my Mom during the school year and visited my Dad every other weekend and school vacations, including the summer.

I REALLY enjoyed visiting my Dad. Yes, he spoiled me (I'm still spoiled to this day) but it was more than that. I think the infrequency of the visits made me appreciate my time there more and where he lived was just so cool. He lived in a condominium complex that had a playground, a basketball court, tennis court, pool but most importantly, lots of other kids.

On the Friday's or Saturday's that my Dad would pick me up, he'd usually have a gift for me. Nothing extravagant, but nevertheless awesome. A 2600 game, a Star Wars figure, a Matchbox car.

Over time and with a few Christmases thrown in, I amassed quite a collection of toys and games.

I obviously had an Atari 2600. Looking back, I didn't have a lot of games, but living in the moment, it felt like I did. We probably had 25-30 games. (I can't say for certain because the lines between "owned" & "borrowed from a friend" have become blurred over the years.)

I was (& am) a huge Star Wars fan. My collection began before my parents divorced and only grew in the ensuing years. I had a cardboard box that was about 3 feet high & 3 feet across FILLED with vehicles, playsets and action figures. I can absolutely nail down exactly what was in my collection and what wasn't to this day.

In 1983, GI Joe entered my life. Over the next two years, I built up a pretty decent collection. Not as large as my Star Wars collection but still significant.

In addition to all that, I collected baseball cards (along with some other sports cards), Matchbox cars, some He-Man & Transformers figures and many, many board games. I had A LOT of stuff.

In the summer of 1985, my main focus was becoming baseball cards. I had bought enough packs of Topps cards that I was able to send away for a complete factory set. Once I received that, I figured, why do I need to keep all my doubles for? So I gave those away. Of course, in subsequent years, some of those cards (Mark McGwire & Roger Clemens rookie cards) went for hundreds of dollars. (Thankfully, the value has since decreased drastically, easing the pain a bit.) 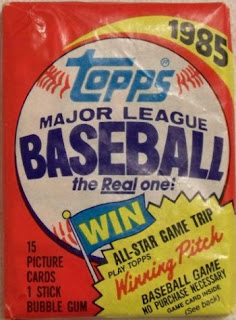 It didn't end there though. In 1986 & '87, I had purchased a lot of Fleer basketball cards & Topps hockey and football cards. As my baseball card collecting passion grew and non-baseball cards didn't have a lot of value at the time, I gave those away too. Those prices haven't dropped. (The Michael Jordan 1987-88 card sells anywhere from $75 on up and I had a lot of those.)

However, the decision to give away other things hurts worse.

I forget the year exactly, but I would guess the summer of 1987. I was 14. I had an NES. I had an interest in girls. We were four years removed from Return of the Jedi. Once again, I foolishly thought "Why do I need all this stuff? I never play with them anymore."

Two young boys lived four condos down from me. I gave them my entire 2600 collection. My father was good friends with another neighbor who had a 7-year-old son. I figured Derek would enjoy all my Star Wars stuff and other action figures. So I gave them to him. Plus my Matchbox cars. (I'm guessing I had close to 100 of those.)

As for my other items, such as board games and other toys, they all disappeared, I'm assuming when my father remarried and we moved out of the condo in 1989.

Sigh. It pains me to even write those words. I would do anything to have them back. Looking back, I suppose it was a nice gesture for 14-year-old me to give that stuff away but what a stupid decision.

I have no idea who the kids are who received my Atari. Thankfully, I was able to reacquire nearly my entire collection I had during the mid-90's fairly inexpensively.

I'm still in contact with the family I gave my Star Wars stuff to. They moved twice and no longer have anything. Before the prequels hit, I was able to pick up a few figures I had but nowhere near what I used to have.

It does make me happy to see that Derek's children are now Star Wars fans and I like to think I played a part in that.

So, if anyone comes across a Bespin Luke figure with his right hand missing (I rubbed it along the pavement to make it more screen-accurate) at a yard sale, pick it up for me. 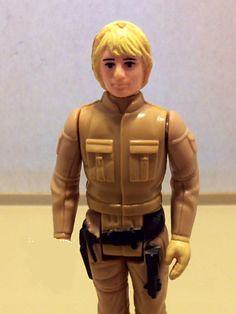